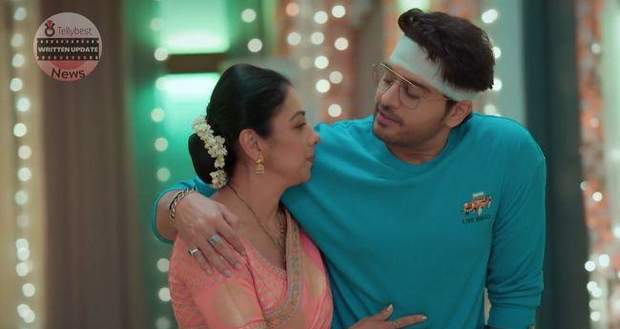 Today's Anupama 7th September 2022 episode starts with Anupama assuring Anuj that she will take her and Choti to see the baby.

Anuj asks her to video call Kinjal and she does, while he apologizes to Kinjal for not being there for her.

Kinjal promises Anuj to visit him after she is discharged and they hang up the call.

Anuj tells Anupama to go to the Shahs but Anupama is reluctant since she does not want to leave Anuj after the attack he got last night.

Anuj orders her to leave early and come back soon because he gets sad when Anupama and Choti are not around him.

Meanwhile, Vanraj goes to pick Kinjal up after her discharge while Leela waits for Anupama.

Hasmukh says she has a family, she might come late.

On hearing this, Kavya asks Leela for the ritual, but Leela directly insults her by saying she can’t do it better than Anupama.

Leela further adds that if Anupama knew Kinjal’s baby is coming what was the need to adopt a child.

This enrages Hasmukh who tells her to stay silent and not ruin the good day.

In the Kapadia mansion, Anupama requests Barkha and Ankush to take care of Anuj and not make him recall anything about the past since he is bound to forget a few things.

Barkha asks if Anuj has forgotten whatever Barkha and Ankush did for him on Ganesh Chaturthi and Ankush stops her from thinking too much.

Anupama wishes that Anuj could also have come along with her to see the baby but then prays to god to take care of him in her absence.

In the Shah house, Pakhi is showing her decorations to Adhik on a video call when Anupama and Choti arrive but they do not see Adhik on call because Pakhi hung up just on time.

Later as Anupama comes Leela taunts her for coming late but Choti saves Anupama by saying Anuj was not fine so Leela should not scold her.

Hasmukh takes Anu inside the house while Anupama goes to work.

However, Leela tells her to warn Choti Anu to not touch the baby.

In their conversation, Leela says after Pakhi a girl is coming into their house.

This triggers Anupama and she defends Choti but Leela does not listen.

In the hospital, Kinjal is discharged and Rakhi tells Vanraj that Kinjal and her granddaughter will go in her car and she will drive.

Vanraj agrees and she takes them to the Shah house where everyone is waiting for the baby.

As soon as the baby arrives, her grand welcome is done with loads of love from everyone.

© Copyright tellybest.com, 2020, 2021. All Rights Reserved. Unauthorized use and/or duplication of any material from tellybest.com without written permission is strictly prohibited.
Cached Saved on: Saturday 1st of October 2022 10:17:31 PMCached Disp on: Wednesday 5th of October 2022 05:55:54 PM