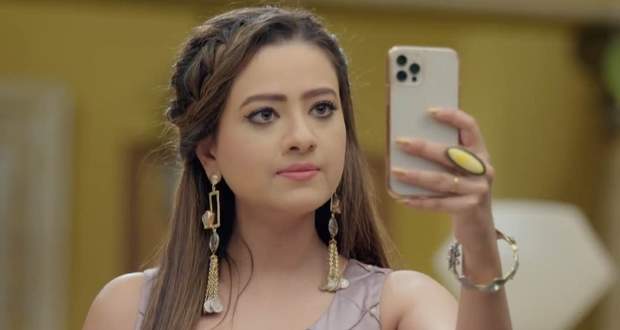 Today's Anupama 8 April 2021 episode starts with‌ Rakhi getting a water bottle from the fridge while Mamaji comes there and asks her why she came through the window.

She says that he must have been dreaming and sends him back while she sees the window open and gets suspicious.

Meanwhile, the thief enters Leela's room while she realises that it is not Rakhi and shouts for help.

The thief runs away from the room while everyone wakes up from Leela's shouts and goes after the thief.

The lady thief says that she did it for her hungry kids while Rakhi says to send them to the police and tries to call the police but Leela stops her.

Leela asks the lady if she will stop stealing if she gets a job and the lady agrees after which she tells the lady to meet her in the morning.

She gives her some food for her kids while the lady shows her gratitude to them and leaves.

The next morning, Leela is doing pooja while Anupama video calls her from someone's phone and talks to her.

Leela asks her about Vanraj while she says that they are staying in separate rooms.

Leela tells her about Rakhi staying over while Vanraj shouts Anu from the other side of the phone and she cuts the call.

Leela gets happy thinking that Vanraj has gone from Anupama to Anu while Kinjal feels dizzy.

Leela argues with Kavya and makes her walk away while she sees Kinjal falling unconscious and rushes to her with Rakhi.

Vanraj calls Kavya and she starts complaining to him which causes an argument between the two.

Kavya goes towards the resort.

Kinjal wakes up and informs Leela that she was dizzy in the morning while Leela and Rakhi think that she is pregnant and goes away to talk.

Kinjal tells Pakhi that she is tensed for Samar while Pakhi tells her to not stress too much.

Elsewhere, Samar is seen dancing to the song 'Bekhuda'.