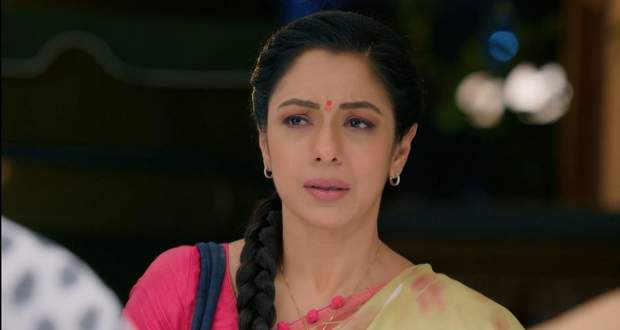 Today's Anupama 8th April 2022 episode starts with Anupama receiving a parcel from Anuj containing flowers (gajra) which she wears on her hair and sends Anuj her picture.

Anuj gets happy on seeing Anupama’s picture and finds out that Anupama has sent him her handmade tea to wish him the best of luck for the meeting.

Smiling with her eyes, Anupama tells herself that Anuj was right when he said that they should find happiness in the little things of life.

Meanwhile, Leela comes into Kavya’s room and asks her to wake up as there is a load of work in the house.

However, Kavya blankly asks Leela to leave her alone as she was down in her spirits after losing her job.

Rakhi messages Kavya to meet her outside which Kavya follows without letting Vanraj and Leela know.

During the meeting, Rakhi asks Kavya to take up a job from her and file a divorce to get out of this house as soon as possible.

Kavya gets perplexed on hearing Rakhi’s suggestion but considers the offer as a critical option to get herself out of this mess.

Elsewhere, Vanraj glares at the termination papers and tears them off to project his anger on the current situation.

Later, Anuj comes back from his meeting and finds Anupama in the kitchen as all the other members are late to arrive.

Anupama sends Anuj to the living room and comes there herself with a cup of tea that both of them share with love.

Engaging themselves in a hearty conversation, Anupama expresses unintentionally that one part of her heart is dedicated to the Shah family and cannot be broken.

Anuj feels bad hearing that and honestly tells Anupama that her devotion towards the Shah family certainly makes him sad but he will never ask her to break off her relationship with them.

Anupama feels blessed on hearing Anuj’s words and thanks him for being so understanding.