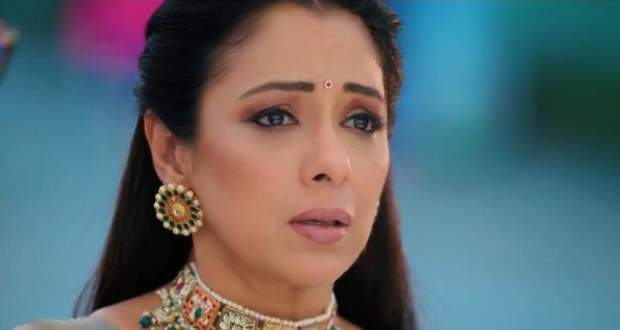 Today's Anupama 8 December 2021 episode starts with Anuj dropping Anupama at her house and suggesting her to rest without worrying about the Shah house.
Anuj informs Anupama that they have to go outside of Ahmedabad the next day for the site work of their new project and he will pick her up on time.
Both tease each other and laugh together before bidding goodbyes to each other.
Meanwhile, Kavya remembers Anupama’s words and decides that she will try to restore her relationship with Vanraj.
Leela comes to give prasad to Kavya and advises her that she only can put things in the right place between Vanraj and her.
The next day, Kinjal comes and asks Toshu if he is going to meet her mother and both engage in an argument which is stopped by Vanraj.
Kavya comes to the breakfast table but Vanraj leaves after seeing her. Leela and Hasmukh try to encourage Kavya.
At the same time, Anupama waits for Anuj to pick her up.
Anuj nearly gets into an accident on his way to meet Anupama and shows up late. He realizes that he has to tell Anupama about his feelings as soon as possible.
On the other hand, Hasmukh sees Kavya sitting alone sadly and cheers her up by playing Ludo with her. Leela sees that and praises Hashmukh for his maturity.
Later, Anuj eats Anupama’s cooked food and watches her adorably as she plays with some flowers.
Surprisingly, Anuj confesses his love for Anupama. He tells her about the accident and confesses again that Anupama is his entire life.
Anupama gets shocked on hearing this.

Upcoming Anupama written episode update: Anuj and Anupama get attacked by goons, Anuj gets hit on his head and Anupama takes him to the hospital.

© Copyright tellybest.com, 2020, 2021. All Rights Reserved. Unauthorized use and/or duplication of any material from tellybest.com without written permission is strictly prohibited.
Cached Saved on: Thursday 20th of January 2022 05:14:27 AM