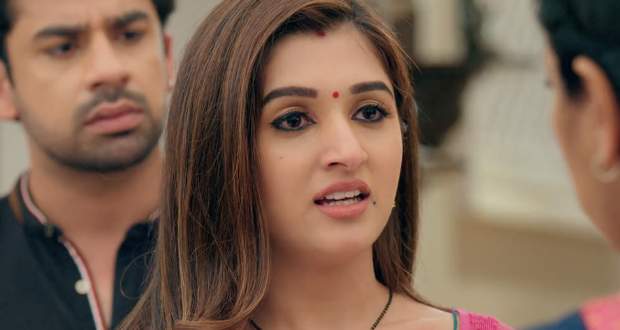 Today's Anupama 8 January 2021 episode starts with Vanraj asking Bapuji to take some rest as it is late. Bapuji agrees that it is actually late and that he did a good job arranging the party for Pakhi.

However, Bapuji states that he will be happy when Vanraj goes back to his home. Vanraj apologizes for his mistakes and points that he has suffered a lot.

Bapuji rebukes Vanraj for being selfish and not thinking about others. He is ready to forgive Vanraj when he actually repents for his mistakes.

Samar and Bapuji gift a watch to Anupama for her first day of job. Samar is ready to take care of Vanraj while Nandini will start Anupama’s dance classes.

Anupama wishes to enter the kitchen but they don’t let her. Later, Anupama is all set to go to school while Baa taunts her.

Vanraj asks Baa to let Anupama leave and also wishes Anupama all the best. Anupama leaves the house with confidence.

Anupama brings apples while Baa taunts her for being late. Kinjal and Paritosh arrive at the same time and Paritosh gets worried for his father.

Baa asks Kinjal to take blessings from Vanraj. Kinjal asks Vanraj to leave if he is alright and further points his mistakes.

Kinjal accuses Baa as well for not being able to see her son’s mistakes. She refuses to stay with Vanraj under one roof.

Kinjal also wants Anupama to take a stand and is not ready to forgive Vanraj. She doesn’t listen to Anupama and decides to leave the house.

© Copyright tellybest.com, 2020, 2021. All Rights Reserved. Unauthorized use and/or duplication of any material from tellybest.com without written permission is strictly prohibited.
Cached Saved on: Wednesday 28th of July 2021 10:53:36 PMCached Disp on: Sunday 1st of August 2021 07:13:26 AM