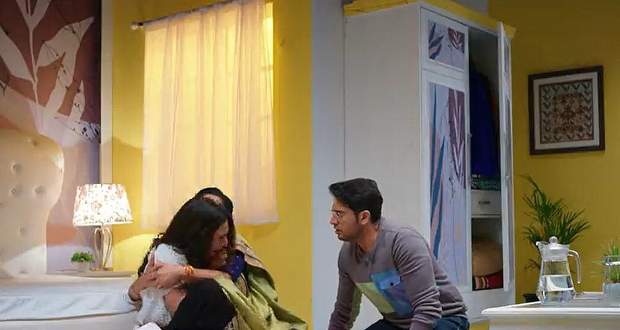 Malvika shuts the door of her room leaving Anupama and Anuj banging on her door from outside.

Anupama tries to open the door using her hairpin but fails in doing so.

Malvika rummages through her belongings and takes out a medicine swallowing it violently with water.

On the other hand, the family members play and enjoy the new years’ party but ask why Anupama and Anuj were being so late to the party.

Anupama comes back with a tool and somehow manages to open the door, they see Malvika shivering on the floor inside the room.

Anupama tries to hold Malvika but she resists begging them to not beat her up.

Anupama hugs Malvika tightly in her arms while Anuj runs away from there seeing his sister like that.

He vomits in the sink and falls on his knees crying and blaming himself for Malvika’s trauma.

Anupama calls Anuj, Anuj rushes to her. She shows him the medicine and asks for what purpose Malvika was taking it.

Anuj checks the medicine and tells her it was medicine for depression with a shocked expression.

Malvika hears the shouts of the new year and screams for help to save her from the beating, she hears sounds and begs them to stop hurting her.

Anupama asks Anuj what happened with Malvika that she is acting like this, Anuj tells her that it was his fault.

Anuj made Akshay leave Malvika’s life and made her marry an eligible bachelor from a good family.

It was on 31st December that he discovered the true face of that man when he found Malvika crying in her room all beaten up.

He explains how in all houses women face domestic violence but can’t receive any help because society never sees this as a major issue.

Anupama comforts Anuj and both cry while holding Malvika in their arms.

Upcoming Anupama episode updates: Anupama pats both Malvika and Anuj while they lie on her lap, Vanraj sees them and offers to help Anuj, Anupama asks Malvika to let out all her anger and pain.

© Copyright tellybest.com, 2020, 2021. All Rights Reserved. Unauthorized use and/or duplication of any material from tellybest.com without written permission is strictly prohibited.
Cached Saved on: Thursday 20th of January 2022 01:47:06 PMCached Disp on: Friday 21st of January 2022 04:28:01 PM