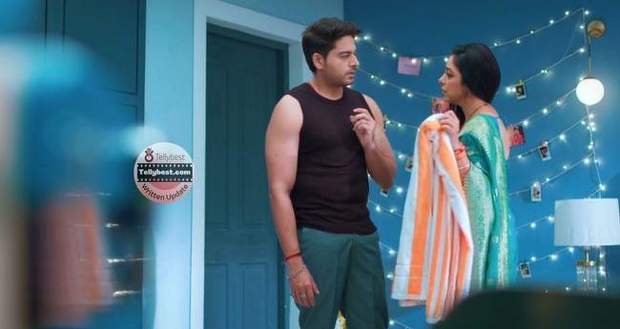 Today's Anupama 8th January 2023 episode starts with Devika giving Anupama a solid plan on how she can impress Anuj and restore their relationship as it was.

Anupama thanks Devika and asks her to come to meet them soon if she wants to know about the results.

After Devika hangs up, Anupama plans out everything she needs to do for her surprise and starts gearing up.

Meanwhile, Leela serves her dhokla cake to Toshu and Hasmukh and tells them that no one is coming to eat that.

Toshu asks Leela to make some tea and snacks for his clients who are scheduled to come to his office a bit later while Leela gets offended about acting like a maid.

As Vanraj comes to the dining table, Leela asks him where Kavya is after which her eyes fall on Kavya coming out of her room in a short sleeveless dress.

Leela calls Kavya’s fashion “shamelessness” and says that her handkerchief is also bigger than Kavya’s dress.

Kavya reveals that she is resuming her modeling career which leaves Leela shocked while Vanraj says that modeling is also a profession and there is nothing wrong with it.

Vanraj tells Kavya that he will drop her at her destination with a worried face and leaves with her.

Leela says that everyone has gone mad after the new year started to which Hasmukh replies that they can only show the others the way life is lived, rest the others will live on their own.

Kinjal leaves for her office after announcing that she will focus on herself and Pari because she has no hope left for Toshu.

Samar and Dimple come to the Shah house and have breakfast together along with others which irritate Leela as she cannot bear Dimple coming closer to them.

At the same time, Anupama desperately waits for the clock to strike 8 as that is when Anuj is coming back home.

With the music playing, Anupama grooms herself into wearing a beautiful saree matched with accessories.

Anupama dances around the house while she decorates everything and waits for Anuj’s entry with the lights off.

As Anuj enters, Anupama instantly hugs him and says a loving poem for him to show Anuj how much she loves him.

However, Anupama gets scared to see another man standing and asks the lights to turn on immediately.

A man appears who awkwardly asks Anuj if he should go back but Anuj asks him to come into the house.

Anupama gets embarrassed as she discovers that the man is Dheeraj, Anuj’s childhood friend who returned from Canada recently.

Dheeraj gets fascinated looking around the house and tells Anuj-Anupama that he came on a wrong night and interrupted them unintentionally.

While joking about things, Anuj and Dheeraj discuss marriage and say that the good times change into bad times after marriage.

Anupama feels a bit bad about hearing such a thing from Anuj but takes it as a joke.

As Anuj mentions Dheeraj’s wife Priyanka, his smile disappears and he avoids the topic cleverly.

Dheeraj makes the atmosphere light with his jokes and apologizes to Anupama for crashing her surprise plan.

Anuj says that he is glad to meet Dheeraj as after marriage, he had started to feel lonely a bit.

As Anupama leaves, Dheeraj sits on Anuj's lap and runs his fingers on his face asking Anuj to be romantic in that romantic environment.

Anuj smacks Dheeraj to make him go away and leaves to check on Anupama.

Anupama comes to prepare dinner for Anuj and Dheeraj with Anuj coming after her to help in doing the chores.

Anupama sends Anuj back to his friend and assures him that she will do everything by herself while Anuj’s words continue to play in her mind.

© Copyright tellybest.com, 2022, 2023. All Rights Reserved. Unauthorized use and/or duplication of any material from tellybest.com without written permission is strictly prohibited.
Cached Saved on: Wednesday 25th of January 2023 09:29:45 AMCached Disp on: Tuesday 31st of January 2023 06:30:08 PM