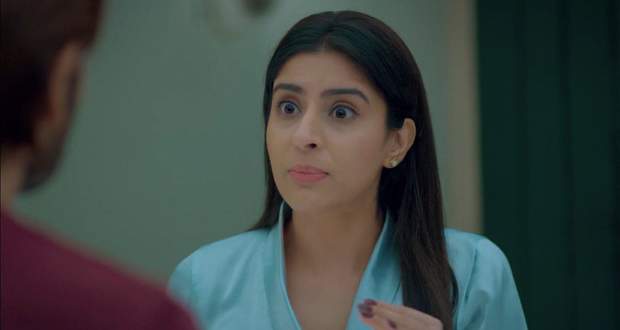 Today's Anupama 8th July 2022 episode starts with Anuj hugging Anupama and comforting her by saying she did right.

Anupama tells Anuj that she will talk to Pakhi the next day and she is sure Pakhi will understand her feelings.

Elsewhere, Adhik tells Pakhi that they will listen to their hearts and bids her goodbye.

As Pakhi comes out of the bathroom, Leela questions her but Pakhi tells Leela that she will keep the bathroom door open from now on so that Leela can barge indirectly in the future.

As Anuj and Anupama romance, he gets hurt by her jewelry after he removes them for her and puts her to sleep.

The next morning, Anuj notices Anupama's sullen mood and dances to make her happy again.

Meanwhile, at the Shah house, the family is having breakfast while Pakhi comes downstairs and recalls Vanraj slapping Adhik.

Leela tells the family about Pakhi being in the bathroom for a long time to which Pakhi gives her a sharp reply which isn't liked by them.

Pakhi states that she is leaving for college while Vanraj stops her and states that he will pick her up and drop her off from now on.

Meanwhile, Barkha talks to Anupama and sees her making love notes for Anuj in the tiffin.

Anupama makes her do the same for Ankush while Barkha reveals that she wants to open up a boutique.

However, Anupama tells Barkha to give her a detailed presentation in the evening and leaves as she gets a call.

Adhik sees Barkha's upset mood and reveals his intention in getting together with Pakhi and tells her that she can use it to her advantage.

Meanwhile, Anupama learns from Samar that Vanraj is dropping off and even picking up Pakhi from college.

Elsewhere, Pakhi gets dropped off at one side of the college and goes to the other side where Adhik is waiting for her in his jeep.

Later, Anupama is going to her work in a rickshaw when she sees Adhik and Pakhi together which shocks her.

Adhik brings Pakhi to a cafe and holds her hand while Anupama enters the cafe and gets angry.

© Copyright tellybest.com, 2020, 2021. All Rights Reserved. Unauthorized use and/or duplication of any material from tellybest.com without written permission is strictly prohibited.
Cached Saved on: Saturday 1st of October 2022 12:09:18 AM