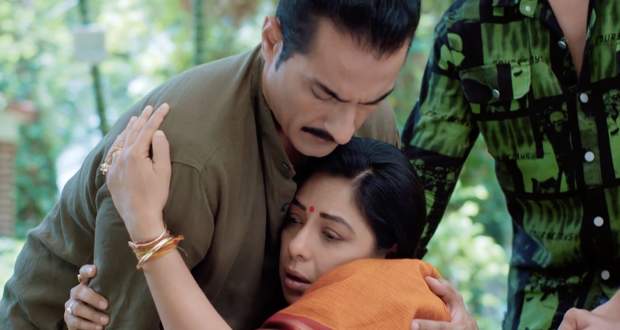 Today's Anupama 8 June 2021 episode starts with Kinjal calling Samar to know about Anupama's health but Samar doesn't receive the call which makes everyone worry about Anupama.

In the hospital, Anupama stops breathing but later on, she comes back to normal which makes Samar and Vanraj feel relieved.

Further, Rakhi provokes Kavya against Anupama and tells her that she is feeling pity for her as she isn't getting Vanraj's love and family members' respect.

Meanwhile, Nandini interrupts their conversation and she says that soon Leela will accept her as Samar's wife and she won't let any ominous thing happen at home.

Later, Vanraj requests Dr. Advait to take the hospital charges from him but Advait refuses as he says he believes in Anupama and if she has promised him to repay the amount she will surely do that.

After some time, Hasmukh tells Vanraj to forgive Kavya's mistake and start with a new beginning with her.

Vanraj sternly refuses Hasmukh's advice and tells him that he won't forgive Kavya until she understands her mistake.

Afterward, Kavya scatters all the arrangements made for welcoming Anupama.

The atmosphere changes and becomes joyful as Anupama comes home.

Everyone gets delighted to see her.

Kavya gets upset about seeing Anupama and talks about her honeymoon plans with Vanraj in front of everyone.

Upcoming Anupama written episode update: Vanraj lashes out his anger on Kavya in front of everyone.

© Copyright tellybest.com, 2020, 2021. All Rights Reserved. Unauthorized use and/or duplication of any material from tellybest.com without written permission is strictly prohibited.
Cached Saved on: Monday 17th of January 2022 10:09:43 AM