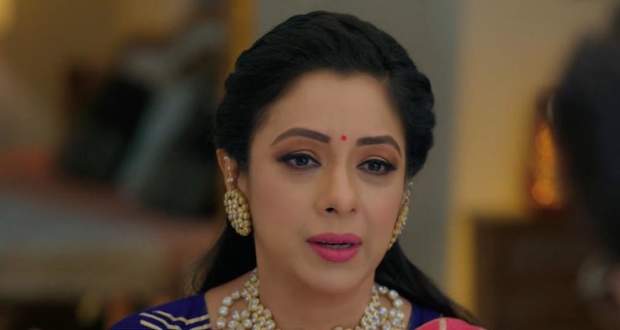 Today's Anupama 8th March 2022 episode starts with Anuj and Anupama together in the auto when Anuj sleekly wraps his hands around Anupama’s shoulder.

They reach the Shah house and Anupama leaves after encouraging Anuj for his meeting with “all the best”.

Anuj and Kavya silently watch as Anupama and Vanraj happily engage in the conversation of Kinjal while feeling a bit insecure among themselves.

Feeding Kinjal with care, Leela was joking about drinking the alkaline water when Rakhi appears and snatches the bottle from her.

Rakhi showers an abundance of insults and teases towards the Shah family while Anupama requests her to stop telling such low things.

As Toshu comes, Rakhi asks him and Kinjal to go to the gynecologist together with her which Toshu politely declines by making the excuse of work.

However, seeing the pale faces of Kinjal, Anupama, and Leela, Rakhi gets suspicious about the situation.

On arriving at the dance academy, Anupama determines to work the hardest to achieve Anuj’s dream of her winning the dance competition.

Samar encourages Anupama to tell her feelings to the people as Anuj is waiting for her to declare their marriage.

Taking his mother’s hands in his own, Samar explains that life and fate can never be perfect at the same time so she should take the first step towards Anuj without constraining herself.

Anupama was dancing while thinking of Samar’s words when Anuj catches her as she was about to slip.

Making Anupama squirm with joy, Anuj delivers that his friend has agreed to make him partner without any investment as he trusts Anuj.

Anupama tells Anuj that this is his true income and she cannot wait to see the earlier Anuj back in action.

Playing a few flirtatious jokes, Anuj and Anupama were laughing together when Anupama proposes Anuj go on a date with her to celebrate his first step towards success.

However, as Anupama and Anuj were on their way to leave, Kinjal comes there asking Anupama if she can accompany her to the doctor.

With disappointment in their eyes, Anuj and Anupama silently stare at each other.