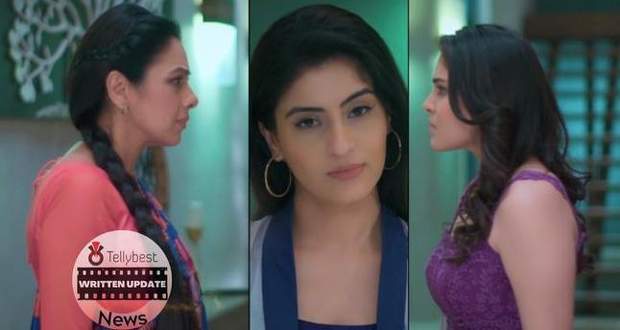 Today's Anupama 8th November 2022 episode starts with Anupama and Anuj reaching the Shah house, where Anupama is still in disbelief over Pakhi's wedding.

Kavya says that sangeet, and mehendi should happen, and Anupama says Pakhi would enjoy that.

However, Pakhi introduces herself as Adhik's wife to Barkha's friends.

Barkha's friends are shocked to hear that and ask Barkha why they weren't invited.

On the other hand, Vanraj gives an envelope to Anuj containing a cheque he had saved for Pakhi's wedding.

Barkha is at a loss for words, but Pakhi chimes in saying that Adhik and her got married in a hurry, so they only invited their close friends and family.

Pakhi also says that a grand wedding is set to take place in a few days and she is sure Barkha would invite them to it.

Barkha is enraged hearing that and gives an earful to Pakhi saying that she is a gold-digger.

Pakhi asserts that she may very well be Anupama's daughter but she won't keep quiet and would reveal secrets about Barkha.

Barkha asks Pakhi to not cross her limits.

Pakhi, however, spills all secrets of Barkha, about how her business was a flop and therefore they scurried back to India, and that this house belongs to Anuj which she is openly flaunting.

Barkha shouts at her for insulting her in front of her friends but Pakhi storms off.

Barkha sees Anupama entering and tries to insult her but is rather quietened down by Anuj.

Barkha says that as usual Pakhi misbehaved, and asks Anupama if she gave any manners to her daughter.

Suddenly, Pakhi comes there and says Barkha is the one who needs manner and the rest are shocked.

Anupama asks Pakhi to behave properly, as this is not her paternal home but the home of her in-laws.

Pakhis says she will only speak the language that the other one speaks which is misbehavior in Barkha's case.

Anuj also says that elders cannot be disrespected no matter whose mistake it is.

Adhik says that the mistake is of Barkha as well, but Anupama tells him to behave like a bridge between Pakhi and Barkha and not retort back to Barkha his own sister.

Anuj asks both Barkha and Pakhi to apologize to each other.

Barkha immediately says sorry, but Pakhi says so only after Adhik's nudging.

Meanwhile, at the Shah house, Leela tells everyone that the jewelry saved for Pakhi can be given to Arya as Pakhi is now the daughter-in-law of the Kapadias.

Leela also says that Pakhi won't even look at these jewels, but Hasmukh says that it is Pakhi's choice but the Shah will give the jewels.

Suddenly, Kinjal and Arya arrive at the Shah house, and Leela wards off the evil eye.

Paritosh cries looking at her when Kinjal hands over Arya to Paritosh.

Vanraj comes over there and cuddles with Arya.

Everyone secretly hopes that the distance between Vanraj and Pakhi is quickly filled in.

Meanwhile, Anupama sees Adhik making coffee and applauds him for doing so, and warns him to not cast a blind-eye towards Pakhi's mistakes.

Adhik takes the coffee and asks Pakhi to change her mood and not be so angry.

Pakhi says that her emotions aren't a switch that would be turned off or on any second.

In an attempt to make Pakhi laugh, Adhik tickles Pakhi and they share an intimate moment.

© Copyright tellybest.com, 2022, 2023. All Rights Reserved. Unauthorized use and/or duplication of any material from tellybest.com without written permission is strictly prohibited.
Cached Saved on: Monday 21st of November 2022 10:10:36 AMCached Disp on: Friday 9th of December 2022 05:46:23 AM