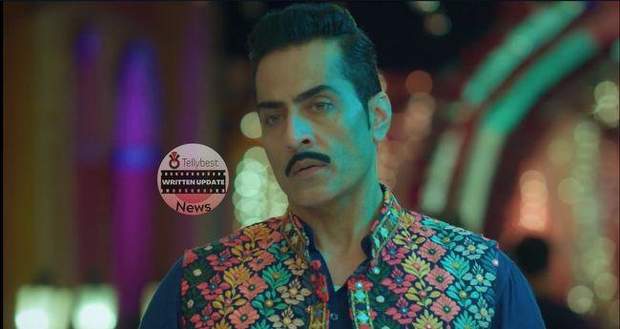 Today's Anupama 8th October 2022 episode starts with Toshu running away with Arya while Anupama runs behind him.

Vanraj and Samar also run behind them while Anupama tries her best to make Toshu understand that the baby can not live without her mother.

However, Toshu says the baby can live without her mother, not her father.

Anupama screams at Toshu to stop and says what he is doing is wrong, especially with Kinjal.

Vanraj calls Toshu's name and he finally stops when there is a wall in front of him.

Anupama says when kids start walking on the wrong path, only the mother has to come and put them on the right path.

She asks Paritosh to give Pari back to her but he says she is only his daughter, not anyone else's.

Telling that a good father always thinks about his kids' well-being, Toshu has to do the same.

Repeating to give Pari back to her, Anupama glares at a nervous Toshu who kisses Pari's cheek and gives her back to Anupama.

Back at Shah House, Kavya informs Kinjal that Pari is in Anupama's arms and safe.

Toshu arrogantly states he became like this due to Anupama.

Vanraj scolds Toshu for stealing Pari away, but he screams at both Anupama and Vanraj.

Toshu calls Vanraj a hypocrite' and says even Vanraj did the same mistake but is still getting to play Dandiya.

Anupama tells Toshu that since he loves Pari so much, he at least should change for her in the future so she shouldn't think ill of him once she grows up.

Toshu starts beating his head against a stone top but Vanraj stops him.

Anupama asks Toshu to stop his madness and he says he will never say sorry to Kinjal.

Meanwhile, Anuj worries about Anupama and tells GK that the real problem will start now.

GK tells Anuj that the Shah family has always been unstable but Anuj worries about Anupama's condition for bearing Toshu's madness.

However, Anuj is proud of his Anupama since she will never stop doing the right things in her life.

Leela looks at the door & Anupama finally arrives with Toshu, Vanraj, and Samar.

Kinjal takes Pari in her hands and Anupama pushes Toshu forward to apologize.

Kinjal tells Toshu he will first go to jail for kidnapping her daughter and Leela asks someone to stop Kinjal from doing so.

Vanraj meddles in between but Rakhi says what Toshu did is not a household mistake; it is a kidnapping.

© Copyright tellybest.com, 2022, 2023. All Rights Reserved. Unauthorized use and/or duplication of any material from tellybest.com without written permission is strictly prohibited.
Cached Saved on: Monday 21st of November 2022 06:04:54 PMCached Disp on: Thursday 1st of December 2022 01:57:47 AM