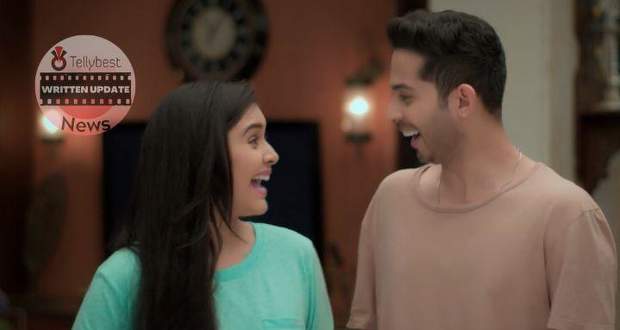 Today's Anupama 8th September 2022 episode starts with the celebration of the arrival of the baby and performing several rituals in the Shah house.

Anupama does the aarti of the baby when Choti asks if she can take the baby.

Leela directly disagrees and orders Anu to stay away.

The family gets into commotion when everyone wants to carry the baby.

Anupama reminds them about the other ritual where the baby is fanned with a Peacock feather in the hands of her father.

Rakhi gets annoyed with the name of Paritosh while Anupama requests her to perform the ritual.

Rakhi takes the baby but gives it to Kinjal while Leela taunts her for being unable to differentiate between Toshu and Kinjal.

Rakhi indirectly taunts Paritosh that now all rituals are over now she is taking the baby back with her.

This annoys everyone and they keep disagreeing in saying that she will come later.

Kinjal requests Rakhi to let her stay and Rakhi agrees.

Later Samar calls Anuj and shows him the fanning ritual in which Vanraj and Anupama sit together with the baby and are fanned by the rest.

Anuj gets irked and when Barkha brings him some food he declines their help and says that if they think he is annoyed because Anupama is enjoying her time while he is sitting being pathetic.

Barkha and Ankush try to convince him more but that only makes the situation worse and Anuj yells at them in his anger.

He calls GK to comfort him and tells him to make Barkha and Ankush leave.

The duo gets annoyed since Anuj shouted at them in anger about missing Anupama and his mood swings.

Meanwhile, Rakhi taunts Toshu to be a responsible father while Vanraj defends him by saying Toshu would unintentionally also never do something to hurt Kinjal and the baby and he'll take good care of his family.

Rakhi retorts at him by saying like how he did and Vanraj raises his voice only to bring it back, low.

He asks her to not disrupt everyone's mood.

Later, Leela says that the baby will sleep in that cot and Rakhi gets annoyed but childish and says she bought a beautiful cot for the baby to use.

Leela says she can use that at home while Rakhi says she’ll make sure to come to the Shahs daily to see Paritosh’s responsibility.