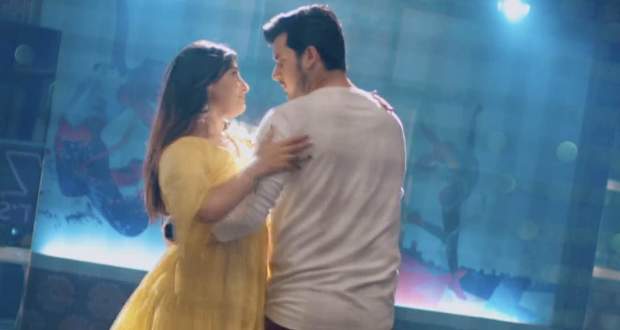 Today's Anupama 9 April 2021 episode starts with Samar feeling worried while sitting in front of mirrors when Nandani comes there and surprises him.

Meanwhile, Rakhi is worried that their suspicion might be wrong while Leela tells that their hunch is not wrong and that Kinjal is pregnant.

Rakhi tells Anupama on call that Kinjal is pregnant which makes her emotional while Leela hopes that the news turns out to be true so that Anupama stays.

Samar and Nandani do a dance performance together and confess their love to each other.

Rakhi, Leela and Anupama are talking while Kinjal comes from behind them crying and runs away saying that she can't be pregnant.

Kinjal, Rakhi and Leela are sitting together on a bench with Anupama on a video call.

Kinjal keeps denying it while Anupama consoles her with Leela and Rakhi encouraging her.

Kinjal says that Paritosh is not ready for it and others console her.

Meanwhile, Kavya ignores the police officers shouts and goes inside the restricted area while saying that her would-be husband is in a problem and that he needs his medicines.

Anupama tells Kinjal to not worry and do the test to be sure.

Elsewhere, Samar tells Boddy to remove his name from the list of competition which Nandani and he tells her that he is not in the right state of mind to dance.

The police stop Kavya from going inside and tell her to go back.

Rakhi and Kinjal go to the hospital while Leela gives vague answers to Hasmukh.

Kavya goes to a priest and asks him to find an auspicious date for her and Vanraj's marriage but the pandit says that there is no auspicious time for marriage saying that their Kundali's don't match.

© Copyright tellybest.com, 2020, 2021. All Rights Reserved. Unauthorized use and/or duplication of any material from tellybest.com without written permission is strictly prohibited.
Cached Saved on: Tuesday 18th of May 2021 04:18:34 PM