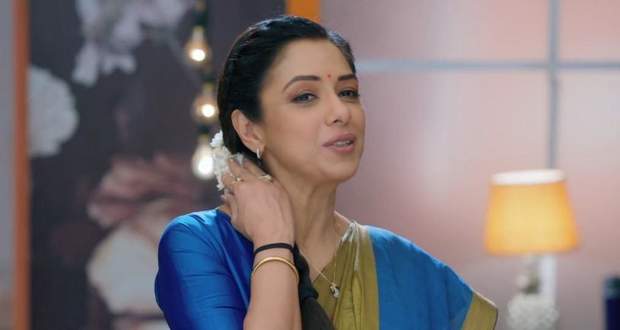 Today's Anupama 9th April 2022 episode starts with Malvika and others interfering with Anuj and Anupama’s hearty conversation and barging in for the discussion of the marriage.

The family members divide the duties among themselves with Samar and Kinjal taking up the decoration responsibility and Malvika and Devika contributing to the dresses and costumes.

Amid the conversation, Hasmukh notices a message and walks out of there which gets noticed by Anupama.

Hasmukh calls Leela and asks her why she is calling him repeatedly to which Leela replies that Vanraj’s condition is not good.

Stressing on Vanraj’s words about dying, Leela expresses her anxiety about Vanraj taking any drastic step by himself.

Hasmukh assures Leela that Vanraj is fine and he will talk to Vanraj once he returns to the house.

Anupama provides her help with Vanraj’s situation but Hasmukh asks her to stay away from it.

This whole conversation gets overheard by Anuj who gets upset on seeing Anupama’s behavior change.

Meanwhile, Leela tries to comfort Vanraj but he does not respond to her conversation and shoves her away.

Malvika gets angry and asks Anupama why she asked Anuj to request on the behalf of Vanraj to her.

On hearing Malvika, Anupama gets surprised and clears that she has not talked about Vanraj to Anuj at all.

Anuj enters the kitchen interrupting Anupama and Malvika and declares that it was not Anupama who asked him to talk to Malvika.

Anupama asks him not to forgive Vanraj for all the things he did to him and vents her anger and dissatisfaction with Anuj’s actions.

Anuj tells Anupama that he did that because he cannot see Anupama disturbed for any reason and is selfish to his core when it comes to her.