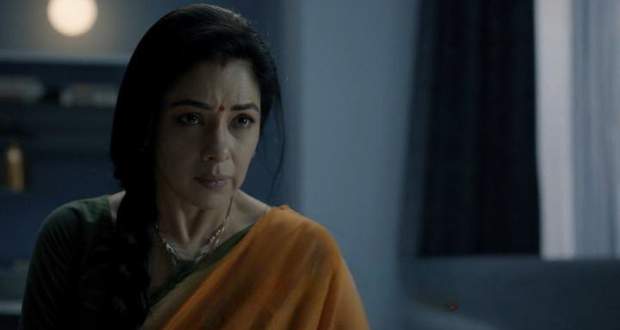 Today's Anupama 9th August 2022 episode starts with Anuj leaving to meet Vanraj and sharing eye contact with Anupama telling her that he is soon going to be back and blowing a kiss at her.

Kavya notices Anuj going to meet Vanraj and goes after him.

While everyone at the temple begins with veneration, Vanraj drives rashly to talk to Anuj.

Kavya follows them worriedly and a phone call shatters everyone.

The police inspectors inform Samar that Anuj’s car met with an accident and both of them fell off the cliff.

Anupama falls on the floor hearing this news and rushes to the accident spot quickly along with Samar and Ankush.

Ankush is surprised to see Kavya present there already.

Anupama shouts Anuj’s name when she sees the height of the cliff, feeling it's impossible to survive from there.

She is all baffled and gets numb while the other Shah and Kapadia members cry helplessly.

Ankush asks Kavya to explain what happened here as she was here already.

Anupama bursts out on the inspector, he tells everyone that the rescue team has gone down the cliff to get both the bodies.

In her heart, Anupama believes that Anuj is going to be fine and finds the ring near the cliff.

Everyone is shocked to know that Kavya witnessed everything and they request her to share it with them.

Kavya is about to reveal, however, that the ambulances come carrying Anuj and Vanraj.

At the Shah house, Kinjal takes care of Pakhi who is extremely heartbroken and scared after hearing this news.

Anupama and Kavya have an emotional breakdown while trying to meet their respective husbands.

Anupama pushes the constable and the inspector tells everyone to directly reach at City hospital as a lot of time has been wasted.

The medic also tells that both of them are alive but heavily injured, giving everyone a sigh of relief.

Anu at the Shah house prays for Anuj’s and Vanraj’s well-being which gets Pakhi, Kinjal, and Dolly emotional.

Pakhi cries and hugs Anu when she worries about being an orphan again.

At the hospital, the receptionist informs all the family members that both the patients were in critical condition when they were brought here.

At the emergency ward, Anupama is longing to have one look at Anuj, however, destiny wants her to wait for a while.

© Copyright tellybest.com, 2020, 2021. All Rights Reserved. Unauthorized use and/or duplication of any material from tellybest.com without written permission is strictly prohibited.
Cached Saved on: Tuesday 9th of August 2022 09:02:06 AMCached Disp on: Sunday 14th of August 2022 11:55:11 AM