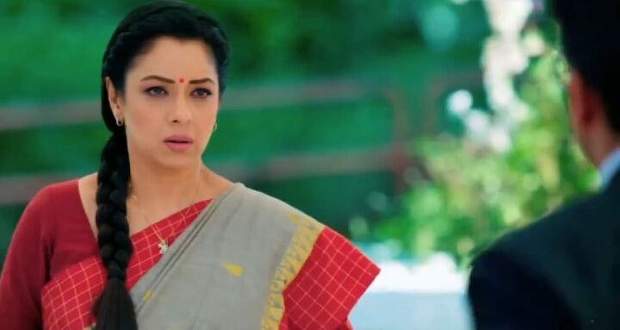 Today's Anupama 9 December 2021 episode starts with Anuj confessing his love for Anupama which surprises her.
Anuj explains that he has always loved Anupama but realized only that morning that he had to confess to her without wasting time.
Anupama was about to reply to Anuj when some goons attack them.
Anuj tells them to take all their money and everything they need, but not hurt Anupama.
Both Anupama and Anuj start to hand over their watches and money to the goons.
Meanwhile, Vanraj finalizes a meeting for his new business. Samar asks him about his condition to which he replies that he is fine.
On the other hand, while taking out car keys from his pocket, a magnet slips from Anuj’s pocket and gets confiscated by the goons.
Anuj requests to give the magnet and offers his entire wallet in exchange for that magnet.
Anupama tries to pull out her ring from her finger but it doesn’t come out while Anuj requests the goons to leave that ring as it’s stuck.
One of the goons forcibly tries to pull out the ring hurting Anupama which makes Anuj lose his calm. Anuj beats up the goons himself stunning Anupama.
As Anuj was on the verge of killing the man who hurt Anupama, another man suddenly hits Anuj at the back of his head with a rod.
Anuj falls unconscious and the goons run away in fear.
Anupama rushes Anuj to the hospital with panic and worry.
She tries to contact Kaka, Samar but none of them picks up. Finally, she calls Vanraj who picks up.
Anupama cries recalling the memories she had with Anuj.
Later, the doctors inform Anupama that if Anuj doesn’t regain consciousness within the morning, he can go into a coma which leaves Anupama shocked.