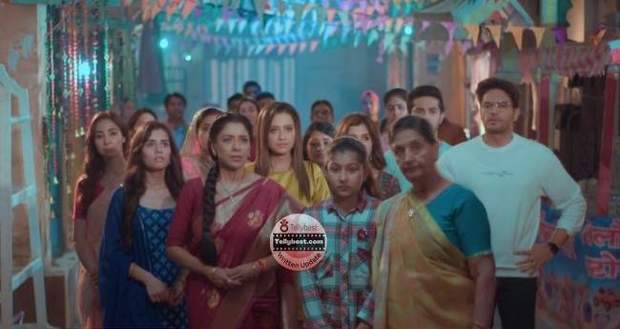 Today's Anupama 9th December 2022 episode starts with Anupama asking Leela why Pakhi is staying in the Shah house still even though there is no need for that anymore.

Leela tells Anupama to focus on her own household and not bother with the issues of Pakhi anymore.

Just then, Anupama hears Adhik arguing with Pakhi outside regarding household work.

Adhik asks Pakhi to help him a bit in managing the household as he is struggling to do both at the same time.

Pakhi tells Adhik that she cannot wash utensils because of her nails and asks him to buy a dishwasher.

Adhik replies to Pakhi that she will not use the dishwasher at all just like she does not use their washing machine.

Pakhi says that it is convenient for her to give her clothes to Kavya rather than washing them herself.

Reminding Pakhi how she made Hasmukh press their clothes once, Adhik asks Pakhi to have some shame and take up her responsibilities.

Adhik asks Pakhi to stop sitting around like a useless person and put on weight.

Hearing that, Pakhi asks Adhik not to body shame her but Adhik says that he is telling the truth as she does not do her own work.

Anupama feels bad for Adhik as she spots Pakhi arrogantly going away leaving him behind.

Later, as the electricity goes off while Pakhi enjoys a magazine, Anupama comes to her and asks her to take up her responsibilities.

Anupama tells Pakhi to complete her studies at least or else her children will be ashamed of her as a mother just like her.

Pakhi feels bored while hearing Anupama’s lecture while Anupama suggests she also needs to do something for Adhik.

Leela asks Anupama not to scold Pakhi and says that they can look after themselves.

Anupama tells Leela not to spoil the children with her love as they will never learn to walk by themselves in the course of their lives.

After Pakhi and Leela leave, Hasmukh assures Anupama to stop worrying about Pakhi and hands her cream rolls meant for Anuj and Anu.

Meanwhile, Anuj scolds Adhik for messing up a proposal and asks him to convince the client as soon as possible.

Adhik says that so much work and responsibilities are tiring him out and distracting him from his work.

Anupama stares at Anuj with tempted eyes as Anuj angrily converses on his phone and says that he is looking very handsome while being angry.

Anu and Dimple bring Anupama to reality and share the cream rolls with a laugh.

After Anuj loses another deal, he becomes extremely angry and frustrated and takes charge of the company again to mend things.

The next day, Leela asks Samar to stay away from Dimple while he tells the family members about his dance academy.

Samar gets angry on hearing such a comment and asks why Dimple is being marked with such a thing.

Adhik comes back from work exhausted but remembers something and panics by himself.

On the other hand, Anuj acts frustrated and says that he cannot see the company’s reputation going down.

Anupama determines to keep Anuj away from the family fights and problems so that he can focus on his business more.

© Copyright tellybest.com, 2022, 2023. All Rights Reserved. Unauthorized use and/or duplication of any material from tellybest.com without written permission is strictly prohibited.
Cached Saved on: Wednesday 25th of January 2023 12:37:22 PMCached Disp on: Sunday 5th of February 2023 03:03:45 AM