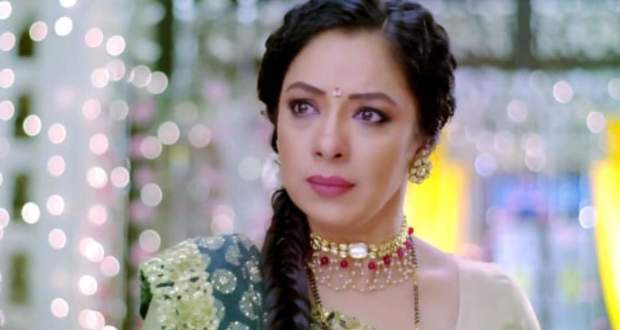 She disconnects the gas cylinder and shots to security seeing the front door burning.

Meanwhile, Samar meets Nanadani and tells her that he got a permanent job at New Age acadmay and thanks her for remaining him to them while she says that it is because of his talent.

Anupama breaks a window and gets the kids out but herself falls from the table and hits her head making her unconscious.

Samar video call Pakhi but gets shocked hearing that Anupama is trapped in fire and rushes to the school.

Pakhi calls Vanraj and informs him of that happenings and tells him to come immediately.

Anu w2akes up hearing Samar's voice and manages to get out with much difficultly by covering herself in a carpet.

She takes the kids and and collapses while Vanraj and Samar take her to the medical room.

Meanwhile, Kinjal and Kavya watch Anuoama on the news while Kinjal goes telling Kavya to handle the meeting.

Kavya thinks that Vanraj never trusted her and feared that she will get better than him while Kijal believes in her to head the whole project.

Anupama regains conscious and asks about the students while Samr tells her that they are fine because of her while Pakhi praises her.

Anupama admits that she warned the school to not use the gas stove and gets tenses seeing her bandaged hands.

Upcoming Anupama episode update: Principal tells Anupama to take the blame of fire on herself.