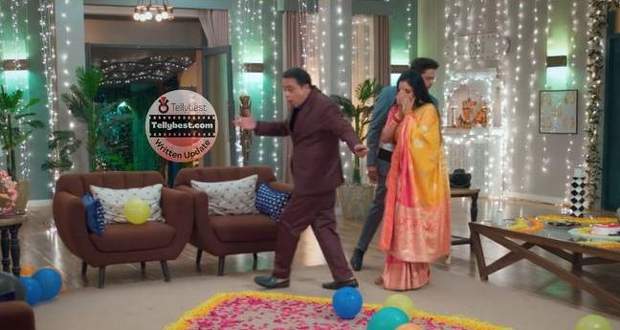 Today's Anupama 9th January 2023 episode starts with Hasmukh teasing Leela that she is behaving like a teenager as she is constantly using her phone.

Leela tells him that she wants to apologize to Anupama for what happened.

Hasmukh is surprised and says that his wife's soul is missing and is exchanged for some intruder's soul.

In the meantime, Samar and Dimpi arrive together back from their academy.

Leela goes to Dimpi and sarcastically says that she should return back to her house and not stay there in their house.

Dimpi tells Leela that they are just friends and strictly colleagues.

Leela immediately answers that she has heard a familiar statement from Vanraj and Kavya and that turned out very different.

Leela continues to tell Dimpi that she doesn't like her because she knows her intentions.

Meanwhile, Anupama is preparing and serving snacks to Anuj and Dheeraj.

Dheeraj tells Anuj that he must really love Anupama to wait for 26 years to be with her.

Dheeraj then asks Anupama to tell her version of their love story as he has had enough of Anuj's version.

However, before Anupama could answer, she starts getting a call from the Shah house.

Anuj looks at her sternly, Anupama remembers that Anuj wanted to leave the past in the past and thus she does not pick up the phone.

Back at the Shah house, Leela is furious that Anupama didn't pick up her phone.

Leela says that she wants to tell Anupama to ask Dimpi to stay away from Samar.

Vanraj tells her to calm down and not overthink and let the children follow their hearts as he knows that at the end of the day, they will do what they feel like.

Leela says that if she leaves them alone then they might want to get married.

Elsewhere, Samar and Dimpi stop on their way to get some ice cream.

Dimpy looks worried so Samar asks her what is going on in her mind.

Dimple apologizes to him for talking back at Leela but Samar stops her and says that she doesn't need to worry.

Samar then pauses for a second and tells Dimpi that he likes her making Dimpi speechless.

Meanwhile, Anuj and Anupama ask Dheeraj to tell them about his life and Priyanka.

Dheeraj skilfully changes the subject and tells Anupama that he used to sing when Anuj used to write.

Anupama tells Dheeraj that she has never seen Anuj, so happy and excited.

Anuj tells Dheeraj that best friends bring out the best of him.

Anuj continues to tell Dheeraj that Anupama used to be his best friend before marriage but things change when the names of relationships change.

Anupama gets quite upset hearing this but she keeps her feelings to herself.

Dheeraj asks Anupama what she saw in Anuj when she decided to marry him.

Anupama says that the question should be what Anuj has seen in her.

She goes on and says that Anuj is like the magic stone that turns sand into gold and she believes that in her case, she is the sand.

She says that all her life, she was taught to bow her head down and bear everything that comes her way but Anuj taught her to raise her head high up and walk without fear.

Anupama says that Anuj taught her how to fly, however, no matter how high a bird flies, the soil from the land never leaves her feet and so did the essence of Shah house never leave her.

She says that she neglected Anuj's feelings for their sake and she has a lot of regret in her heart.

Saying this Anupama breaks into tears and couldn't bear to take out any more words from her mouth, she excuses herself from there and runs to her room crying.

© Copyright tellybest.com, 2022, 2023. All Rights Reserved. Unauthorized use and/or duplication of any material from tellybest.com without written permission is strictly prohibited.
Cached Saved on: Wednesday 25th of January 2023 10:07:18 AMCached Disp on: Monday 6th of February 2023 04:35:16 AM