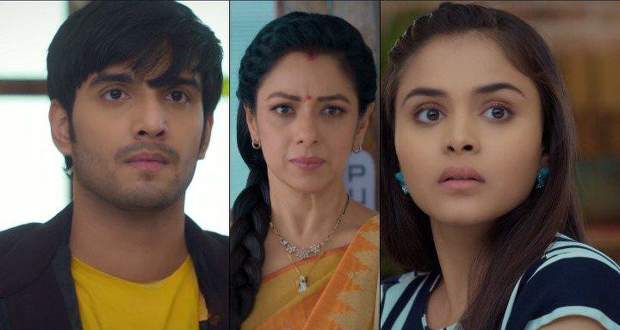 Today's Anupama 9th July 2022 episode starts with Vanraj spotting Pakhi’s ID card on the car seat and wondering how she will get inside the building without the ID.

Meanwhile, Anupama catches Pakhi and Adhik meeting each other in a café while intertwining their hands.

Anupama remains calm and sits down with both the kids to talk to them without causing any hassle.

Seeing Anupama so silent and casually ordering cold coffee for the three of them, Pakhi and Adhik get nervous.

Pakhi asks Anupama what she is trying to do there when she should be in her dance classes.

Anupama replies by asking the same question to Pakhi about what she is doing there with Adhik while missing her college classes.

Coming to Adhik, Anupama asks him if his memory is shallow as he forgot his promise made to her the next day.

Adhik tells Anupama that he has met Pakhi to make her understand his promise only and that is the last time.

Hearing Adhik, Pakhi feels betrayed but understands Adhik’s motives as he signals Pakhi by bumping his leg on hers.

Anupama tells both of them that the family wants them to focus on their careers for now instead of meeting in secret.

Meanwhile, Vanraj reaches Pakhi’s college to give her the ID card and asks about Pakhi when he spots one of her friends.

They inform Vanraj that Pakhi has come to college that day and has missed the lectures.

At the same time, Sara asks Barkha to stop Adhik from playing with Pakhi as she is familiar with Adhik’s lifestyle in the US.

Sara points out the cultural differences between India and US and tells Barkha that dating is not taken so casually here.

Back at the café, Adhik proposes to drop both Pakhi and Anupama but they come face-to-face with Vanraj there.

Vanraj comes toward them while boiling in anger and the first thing Anupama tells him is not to cause a scene there.

Elsewhere, Anuj seems very nervous after conversing on a phone call but hides it from Ankush.

Kinjal says that she is feeling weird while the family members suggest she relaxes.

Anupama, Pakhi, and Vanraj enter the house and Vanraj starts his blame game with Anupama.

Anupama and Kavya agree that anger is not the solution to everything when the fault is both of them.

Without listening to any suggestions, Vanraj announces that from now on Pakhi is not allowed to go to college anymore.