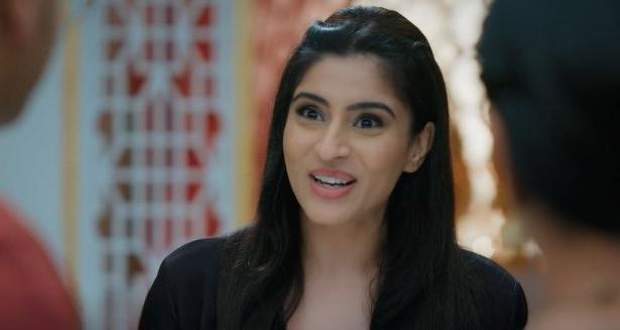 Today's Anupama 9th June 2022 episode starts with Anuj getting angry after Anupama asks him the reason behind the signing authority.

Anupama apologizes while Anuj says there is a reason behind this decision as a wife should be secured even after the death of the husband.

The discussion about death annoys Anupama while Anuj convinces Anupama back and brings a smile on her face.

The next day, Anupama and Anuj get ready for the Pag Phera ritual.

Further, Sara and Adhik enter Anuj's room which reminds Anupama of her children and Sara discusses with Anupama that she wants to be a businesswoman like Anupama.

Later, Samar, Toshu, and Pakhi arrive at the Kapadia house which shocks Barkha as she anticipated them to be kids but they look much more mature than that.

Pakhi tries to interact with Barkha while Barkha seems unavailable and distant.

Ankush is surprised to hear the fact that Anupama is a mother-in-law and will become a grandmother soon.

On finding out about the new roles Anupama has been a part of Ankush appreciates Anupama's strength in starting a new life in her middle age.

Further Ankush adores his brother Anuj for how much love he has for Anupama which irritates Barkha that why he should be worried as Anuj considers anyone related to Anupama as his own relative.

After some time, Anupama is welcomed at the Shah house and surprisingly welcomed by Vanraj with a smile.

Later, Anupama is presented with the Shagun by Leela while Pakhi informs the Shahs about Barkha and Ankush's arrival.

Leela and Kavya are shocked to hear about the new members of Anuj's life as they were not there at the wedding.

On the other hand, Barkha orders some furniture for Anuj's new house and gives him the bills.

Later, Barkha asks curiously about Anupama's signing authority to Anuj and he should consider giving it to someone else as well.

Anuj declines to give authority to anyone as he doesn't feel like it.