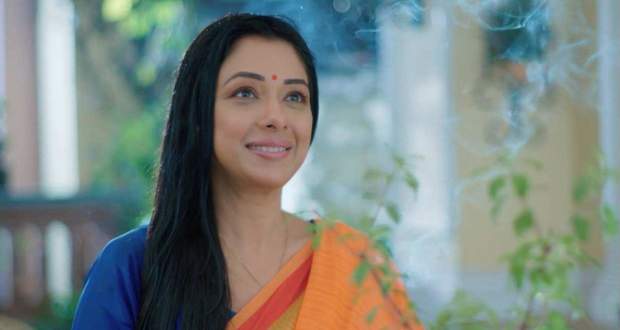 Today's Anupama 9th May 2022 episode starts with the start of Anupama and Anuj starting their performances with Mika Singh and his smashing hit songs.

The whole family grooves in happiness except Vanraj, Leela, and, Rakhi who stand at the side with grumpy faces.

Mika congratulates Anuj and Anupama once more and bids goodbye to everyone at the ceremony.

The mehndi ceremony starts with Anupama starting her mehndi alongside Anuj.

Anupama shows her hand after it gets completed with the names of Anuj and her family in both hands.

On being requested, Anuj also shows his palm with all the names of the children, Malvika and Devika written around Anupama’s name.

Vanraj gets triggered on seeing the mehndi and quickly starts looking for an opportunity to talk to Anuj.

In the middle of the dance, Vanraj gets a hold of Anuj and asks him to come with him as he has to talk to him immediately.

Anuj agrees as he does not want the joyful ambience of the function to get destroyed by Vanraj.

As they leave the house by car, Anupama spots them and tries to stop them by running after them.

Anxious about Vanraj telling negative things to Anuj, Anupama comes back in panic and informs everyone about Vanraj’s deed.

Meanwhile, Vanraj and Anuj finally reach a spot where they can talk and confront each other directly.

Vanraj tells Anuj that he will have to listen to him as he does not have any other option to which Anuj replies Vanraj to hurry up.

The family members try to reach both Vanraj and Anuj but fail in doing so and get worried about Anuj.

Elsewhere, Vanraj points at the mehndi on Anuj’s hand and declares that his children belong only to him and nobody dares to take them away.

On the other hand, Rakhi discovers the medical reports of Hasmukh and feels fascinated by going through them.