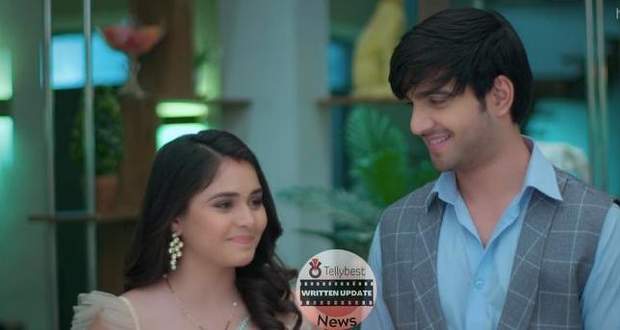 Anupama says she will prepare the food for the wedding with the menu being all the things Pakhi loves.

Anuj says that everyone is happy about the wedding apart from the usual suspects- Barkha and Vanraj.

Meanwhile, at the Shah house, Kinjal asks Paritosh to hand Arya over to her to change her diaper.

Paritosh thanks Kinjal for forgetting everything that happened and coming for the wedding.

Kinjal says she has come but she hasn't forgotten anything.

She says that she has only come here so that people don't talk about her absence.

Kinjal tells Pritosh that after the wedding she will go back to her mother's place.

Leela who eavesdropped on them vows to not let Kinjal leave Paritosh again.

Meanwhile, at the Kapadia house, Anuj and Anupama play with each other in a romantic fashion.

Suddenly, Adhik comes there and announces that Pakhi wants to have a theme for the sangeet.

Adhik also says that the designer will charge extra for making the clothes on such short notice.

Anuj says he doesn't mind and asks Adhik to retire to bed.

Anupama says she wants Adhik and Pakhi to not stay at the Kapadia house forever as they might take Anuj for granted.

Anu and Ankush come over there with a poster for Pakhi and Adhik's wedding.

Barkha is enraged seeing that and vows to not let the wedding take place.

The next morning Anupama is back at the Shah house where Leela and Kavya are having a playful banter.

Anupama is feeling nostalgic seeing Pakhi's kankotri (Wedding Invitation Card) while Leela remarks that the norm is for the father to select the kankotri.

Kavya asks Anupama to convince Vanraj to select the kankotri.

So, Anupama keeps the kankotri on Vanraj's bed and Anupama, Leela, and Kavya hid behind the door to see which one Vanraj likes.

In the meantime, Anuj, Ankush, Anu, Adhik, and Pakhi do a fashion show at home with the theme.

Anuj who sees Barkha standing apart from them asks her to take part in the events lest she regrets it.

On the other hand, Kavya sees that Vanraj is scratched out his name in the kankotri and written Anuj's name.

Pakhi then asks for her pre-wedding shoot to be done at the beach and asks for drones to be used for the photography.

Anupama asks Pakhi to live at the Shah house till the wedding as requested by Leela, as the girl is bid adieu from her paternal house.

Pakhi says that Vanraj should have remembered this when he ousted her from the Shah house.

Anupama says all that Pakhi does is pretend to be rich and emotionally blackmails Anuj and orders her to leave the Kapadia house.

© Copyright tellybest.com, 2022, 2023. All Rights Reserved. Unauthorized use and/or duplication of any material from tellybest.com without written permission is strictly prohibited.
Cached Saved on: Monday 21st of November 2022 05:50:21 AMCached Disp on: Tuesday 29th of November 2022 11:04:02 AM