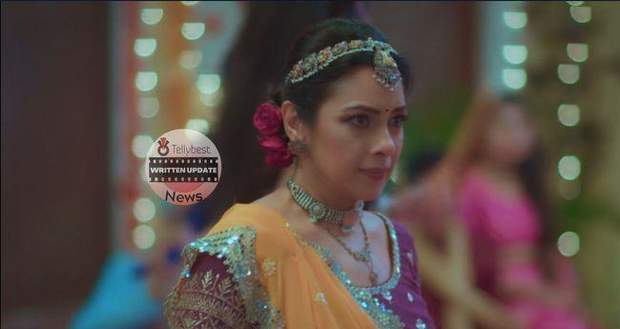 Today's Anupama 9th October 2022 episode starts with Leela defending Toshu's behavior while Rakhi asks what would happen if she kidnaps Pari in the middle of the night.

Dolly sides with Rakhi and tells Leela she has lost her common sense.

However, Vanraj scolds Dolly for worsening the situation and Toshu asks everyone to call the police.

Anupama lets Toshu know that his drama won't work in front of her again & again.

She asks Paritosh to be a dignified human being and apologize for his mistake.

Vanraj also scolds Toshu, asking if he has ever seen jail while Anupama says Toshu likes to play both the betrayer and the betrayed.

Anupama states that Paritosh's whole life has been a tantrum and stops Leela from defending Toshu anymore.

Crying, Toshu says no one is ready to forgive him but he cannot stay away from his family.

Rakhi glares at Leela, stating, Leela seemed like the biggest drama queen of the house but Toshu is proving her wrong.

Suddenly, Toshu tries to grab Kinjal's hands and asks her to beat him up.

When she doesn't do it, Toshu asks Leela to beat him up, and then Kavya who screams at him to calm down.

Grabbing Anupama's legs, Toshu says he needs another chance as he made a mistake.

Anupama gets fed up and taunts Toshu saying, he has never washed his undergarment in his life, how will he handle a second chance?

Hasmukh agrees with Anupama and states that Toshu doesn't even have the dignity to apologize while Vanraj pulls Paritosh up from the floor.

Suddenly, Pari wakes up and Toshu starts smiling goofily at her.

Paritosh states he wants to learn to be a good father, at his home, with his daughter in his lap.

He then asks everyone if a husband has done a mistake, why should Pari's father get punished?

He begs Kinjal not to separate him away from Pari, otherwise, he would die.

Kavya cries at Toshu's condition and Anupama says only Kinjal has the right to decide whether to punish Paritosh or take away his rights as a father.

She then warns Toshu that if he again does any drama despite Kinjal's decision, then he would have it directly from Rakhi.

Meanwhile, Kinjal says she can't ever forgive Paritosh but he can only get another chance as Pari's father.

Saying they will never get back together, Kinjal lays out her terms & conditions clearly and Paritosh accepts them readily.

Taking Pari in his arms, Toshu thanks everyone and narrates a poem to Pari who smiles at her father who is a villain to everyone right now.

Paritosh calls a girl child another chance as he promises to be a good father to "his Pari".

© Copyright tellybest.com, 2022, 2023. All Rights Reserved. Unauthorized use and/or duplication of any material from tellybest.com without written permission is strictly prohibited.
Cached Saved on: Monday 21st of November 2022 06:56:33 AMCached Disp on: Saturday 10th of December 2022 02:16:41 PM