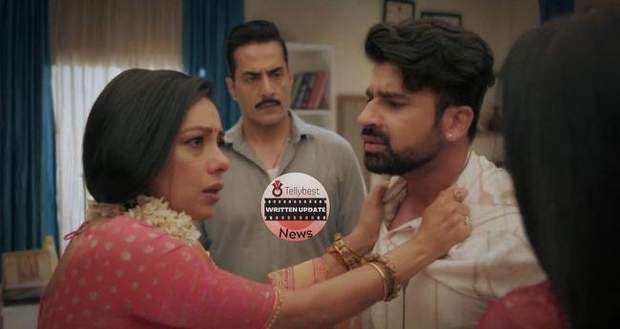 On the other hand, Anuj sees some files in his room with a note from Anupama that she has checked them but needs Anuj’s reassurance.

Anuj is astonished by everything Anupama can do in a single day.

He calls Barkha and Ankush who barge in saying that they knew once Anuj gets calm he will treat them right.

However, Anuj asks them for all of the business files and makes them go.

This infuriates Ankush but Barkha tries to make him calm and says patience is the only key they have.

Meanwhile, in the Shah house, Leela scolds Choti for swinging the cot slowly.

Choti runs to Anupama crying and complaining about Leela while Rakhi and others try to console the child.

Leela says that tomorrow is Pooja for keeping the baby’s name so everyone should take a rest for today.

Rakhi is about to leave but she asks Anupama a promise that she’ll always stand for Kinjal and even in the future.

Anupama gets confused but promises her anyway and Rakhi bids off to leave.

Later Kinjal and Toshu are in a room when Kinjal says that now Toshu is a father so he should not check out girls here and there.

Toshu gets offended at the statement and says she should not say anything like this anytime and Kinjal only apologizes saying she knows Toshu loves her and won’t do anything such.

Meanwhile, Leela demands Anupama to come early tomorrow but Anupama reasons that she tries, however, Anuj is not well therefore, she has to take his care.

Leela does not listen and says she wants her early.

Suddenly Vanraj comes with Choti and gives her to Anupama.

He thanks Anupama for coming and invites Anuj too for the next day along with Barkha, Ankush, and Adhik.

Anupama goes to Anuj and tells him about the invitation and says if only Barkha and Ankush want they can come.

The next day, Anuj is getting ready for the celebration when he gets stuck and struggles with his shirt.

Anupama looks at him and begins laughing as she goes to help Anuj.

She begins teasing him laughing loudly when suddenly Anuj is about to fall but gets saved by Anupama.

Anupama apologizes frequently but Anuj’s frustrations come in and he yells at Anupama that he does not need anyone’s pity on him.

This statement scares Anupama and she leaves saying she has to do some work in the kitchen.

The duo regrets their actions and keeps apologizing in mind.