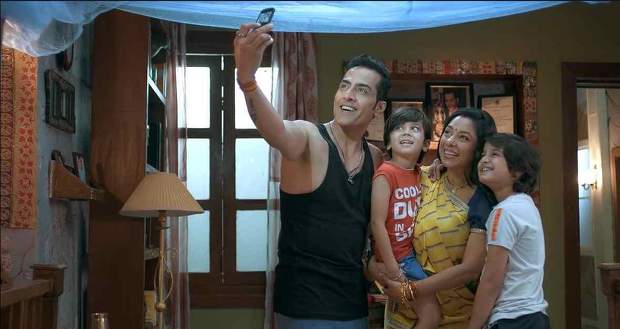 Anupama in her usual talkative style tells him that Vanraj is increasing another floor in their house which will take time and that is why they are still here.

Just then a pamphlet falls from the newspaper attracting Anupama’s attention.

Anupama feels excited to read America’s name but before she could read more Hasmukh comes in asking for paper.

Anupama smiles with delight seeing Hasmukh and bends down to take his blessings.

Hasmukh brought the cream rolls along with the vegetables making Anupama express her concern.

Anupama reminds Hasmukh that consuming cream rolls every day is not good for his health and goes on to put tilak on Vanraj’s nameplate.

Hasmukh ignores Anupama’s concern and calls her to come and listen to her horoscope.

Anupama looks at the nameplate lovingly and cleans it with her Sari before applying a tilak.

Anupama also tells Hasmukh to tell Vanraj’s horoscope instead, as his horoscope will determine her future.

Hasmukh laughs at Anupama’s innocence and tells her to at least allow her horoscope to be hers instead of making everything about Vanraj.

Anupama insists on knowing Vanraj’s horoscope and feels happy to know that there is a scope for flying in it.

As she prepares to leave, Hasmukh asks her to hear her horoscope as well.

Hasmukh laughs at Anupama’s acting and tells Anupama that in today’s horoscope, it is written that “Sapne Udaan Bharenge” (dreams will sore high in the sky).

Just then Leela comes and adds that those flying dreams will clean ‘Methi’ while doing it.

Before sending Anupama to the kitchen, Leela reminds Anupama to touch her feet and take her blessings.

Leela sarcastically tells Anupama to forget her name but to never forget touching her mother-in-law's feet.

Just then Hasmukh's mother asks Leela to clean Methi herself instead of just eating the well-cooked Theplas.

As Leela goes to the kitchen, Moti Baa reminds her to touch her feet and reminds Leela of her own words.

Later, she tells Leela that she is the lucky one to have a wonderful mother-in-law, like her and an equally wonderful daughter in law, like Anupama.

Afterwards, Moti Baa reminds Anupama of the finale of some dance show and asks her to join her.

Anupama adds Leela to the group and tells Moti Baa that they all will watch the show.

Moti Baa mocks Leela for not being a good dancer but Anupama takes Leela’s side and playfully threatens Moti Baa with not watching the show if she taunts Leela anymore.

Later, Moti Baa tells Anupama to dance and perform shows and come on TV as well after shifting to another house.

Moti Baa, in her unique style, tells Leela that talent needs to be displayed just like her jewellery.

Meanwhile, Vanraj gets a call from his colleague telling him that his boss will be sending him to America soon and reminds him to bring Anupama to office dinner.

Vanraj who has been smiling at America’s news gets tensed at the next reminder and tells his friend that he will see about bringing Anupama with him.

After a while, Anupama is preparing breakfast in the kitchen while dancing and talking with Samar.

Just then Vanraj calls her and Anupama rushes to him.

Stopping at the door, Anupama looks at Vanraj approvingly.

Vanraj spots her in the mirror and asks her to dry his back.

Anupama shyly looks at Vanraj while doing his bidding and they are about to get romantic when children barge in.

Vanraj tells Anupama that he has got a camera phone from the office and offers to take pictures with it.

Telling Anupama about having loads of work, he also mentions going to America.

Anupama in her simple ways tells him that may God give him everything he desires.

Vanraj smirks with pride and tells Anupama that he will definitely get everything as he is The Vanraj.

Later, he tells Anupama to prepare his suit for a family get together.

Anupama asks him about her coming along, however, Vanraj puts a blame on her for always being busy with home affairs. Anupama feels disappointed but let it go.

After a while, Dolly asks Anupama about Vanraj asking her to go with her to the party.

Anupam defends Vanraj and gives excuses on his behalf.

Moti baa explains to Anupama how a housewife's life only circles around her family and its work and how sad it is that she cannot even take a day off from them to think for herself.

Anupama also tells Moti Baa that a housewife is divided between the kitchen, husband and children but has no part for herself.

Leaving Anupama alone, Moti baa tells Anupama that she is going to get her share in life.

On the other hand, Leela is praising Vanraj for looking handsome in the suit.

Just then Moti Baa comes along wishing Vanraj best wishes and telling him that he will remember this day forever.

As he is leaving the door, Vanraj is surprised to see Anupama ready to go with him.

Vanraj feels disappointed and gives a lame excuse to keep Anupama from going.

On Anupama’s insistence, Vanraj gets angry and decides not to go at all.

Anupama feels guilty and asks Vanraj to go on his own.

Despite seeing the disappointment on Anupama’s face Vanraj ignores her and goes to the party and instructs her to prepare his favourite dinner for him.

© Copyright tellybest.com, 2020, 2021. All Rights Reserved. Unauthorized use and/or duplication of any material from tellybest.com without written permission is strictly prohibited.
Cached Saved on: Sunday 2nd of October 2022 10:53:35 AMCached Disp on: Friday 7th of October 2022 01:47:58 PM