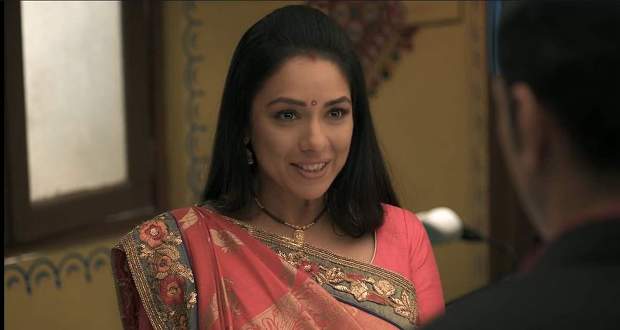 Today's Anupama Namaste America 26th April 2022 episode starts with the party at Patel’s house and Vanraj’s boss (Mr. Patel) tells Dholakia that, his hair would turn white at a young age if he continues to take the stress.

Vanraj enters the party and his colleagues welcome him, by calling him their 'Forest King'.

One of the colleagues mockingly asks if he is truly married or has he just spread rumours about it.

He continues to say that if Vanraj is really married, he would have brought his wife to the party at least once and at that very moment Anupama shows up and stand beside Vanraj.

Everyone starts to murmur and is stunned by Anupama’s beauty.

The story goes in flashback to the time when Vanraj was leaving for the party without Anupama. Vanraj was on the bike, putting on the helmet and unexpectedly Moti Baa comes from behind and shouts Vanraj’s name.

Vanraj, with a breath, says; "Oh Moti Baa you scared me". Without even taking a second, to breathe, Moti Baa responds to him by saying, "You made Anupama cry".

Anupama slightly moves her face to the other side to hide and wipe off her tears.

Moti Baa continues to explain to Vanraj, referring to Anupama, that one should always carry his fortune in his hand with pride and not lock her in the house.

Vanraj tries to justify his action, but Moti Baa insists that he must take Anupama along with him.

Respecting Moti Baa’s words Vanraj agrees to it. On seeing Anupama and Vanraj together Moti Baa blesses them and wishes for their longevity of life.

Anupama's Aura At The Party

They enter the party, and everyone is happy to see Anupama. Vanraj introduces Anupama to his boss and other colleagues.

This act of hers impresses Rajni Patel (Boss’s wife) and she says that it is a unique way to greet, as everyone, nowadays is using good morning and evening to greet each other.

Rajni praises her saying that here every one is wearing very expensive perfumes, but she is the only one with earth like fragrance.

She continues to praise Anupama and says how adorable she is.

After the conversation Rajni takes Anupama with her saying, she should consider this as her home.

Vanraj and his colleagues are standing in a group. One of them says that finally, they got to see Vanraj’s wife.

The other colleague asks him if Anupama knows his stories before marriage referring to his relationship.

One of them replies saying that she will understand, as she is so cute, to which Vanraj gives a sharp glare.

In the meantime, the boss's wife grabs everyone’s attention saying that, who so ever comes to the party for the first time, has to pay an entertainment tax.

She explains to Anupama how she could sing, crack a joke or even dance.

Without even taking a breath, Anupama says that she can dance.

Vanraj's boss notices Anupama looking at Vanraj for permission, and tells her that she should dance and Vanraj would not disagree with it.

To this Vanraj replies that it is completely okay, but deep inside he is unwilling to let Anupama dance.

Anupama starts to dance, and mesmerizes everyone with her beautiful performance. She is applauded for her performance a lot.

Vanraj praises her but deep inside, he only wants to fulfil his own motive for which he came to the party.

Vanraj goes to his boss and starts to enquire about the US project.

However, his boss tells Vanraj, saying that, now that Anupama has completely changed the mood of the party, they will talk about the project later.

Rajni surprises everyone, by asking Anupama to be a part of her work in promoting the Indian culture which is based on the theme of, 'Talented Indian Housewives'.

Anupama turns to Vanraj to know about the management of the house with it.

To this, he replies by saying that, she could go after preparing the lunch and prepare the dinner after she is home.

Boss’s wife sarcastically replies to it that, she is not planning to take Anupama to the Sindhi market but rather to the USA.

The proposal to go to America leaves Anupama with the hope to fulfil her long lost dream, but even with doubts about the management of the family, and if Vanraj would allow her to do so.

Later, Vanraj’s boss remembers about their children and worries.

One of the colleagues replies that Vanraj would do that, as his presentation on Women’s Day explains it completely.

Vanraj’s boss and his wife praise him, for his supportive nature and even says that, if there would be someone else in his place, he would either have not allowed his wife or would have been jealous of her success.

Vanraj’s blood starts to boil, as his boss adds that, he could go to the US on some other project.

At Shah’s house, Leela is angry, about the situation that it is wrong on the part of Anupama, to go out to a party.

Hasmukh defends Anupama saying that, what would Leela do if, Anupama has to go out for some days, at that very moment, Anupama enters excitedly, shouting and jumping that, she is going to America.

Everyone is proud and happy about Anupama’s success but Leela looks off on this situation.

Moti Baa is extremely happy about the news and asks Leela to distribute sweets in the locality.

Anupama comes up with other news that she has to record a dance video for the audition, and if she is unable to clear it, she would not go.

Leela is hopeful, that there is still a chance of her not going to America.

Moti Baa cheers Anupama saying that in the entire Ahmedabad there is no one who could dance like her.

Leela asks Anupama in a sarcastic tone, will she be able to dance, to which Anupama replies that it is difficult but she can do it, and with her family's support she will definitely do it.

Everyone brings up their demands of what is to be brought from America.

The family is enjoying and suddenly, there is a power cut.

Vanraj in his room lights up a candle and is holding Anupama’s passport.

Vanraj speaks to himself saying that, he never thought that Anupama’s passport, which he made for holiday allowance, would be put to use other than an address proof.

Unexpectedly, he receives a message from Ritika, saying that, she is returning to India the next day.

Vanraj immediately gets up and starts to look for his college photos with Ritika.

He remembers the time when, he and Ritika were in a relationship and had to break it off, as Ritika moved to the USA.

Vanraj holds Anupama’s passport in one hand and Ritika’s picture in the other.

He stands confused and questions himself, saying that, where is his destiny taking him, as Anupama would go to the US for a week and in the meantime, Ritika would be there in the same city as Vanraj.