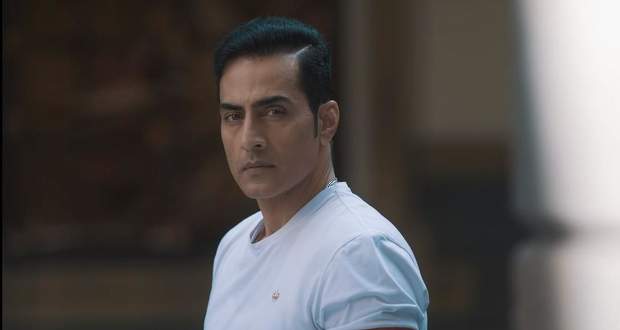 Today's Anupama Namaste America 28th April 2022 episode starts with Vanraj waiting outside and checking himself in the bike mirror.

Vanraj goes into flashback and remembers a similar moment in the past where he shared with Ritika his dream.

He tells her that he saw that he has become a CEO of a company and while giving the speech he gives credit to Ritika’s love for his success.

He further tells Ritika that although this was a dream he plans to make it come true and will conquer the world for her.

Coming out of the flashback Vanraj again looks at Ritika in the cafe and while away his time to make Ritika wait.

Viraj speaks to himself that he has never imagined that Ritika will change his world.

At home, Anupama’s hand slips as she collides with her children and a box of Vanraj trophies falls on the floor.

Leela berates Anupama to be careful of the trophies as it depicts Vanraj's honour.

On Moti Baa’s interference, Leela taunts Anupama for never winning even a certificate.

Moti Baa tells Leela that Vanraj can only win trophies because Anupama is taking care of his household matters.

Moti Baa also predicts having two trophy cases in their new home, one for Anupama and one for Vanraj and soon just like Anupama Vanaaj will also hold Anupama’s trophy.

Leela does not like Moti Baa’s prediction while Anupama becomes happy at the picture.

Meanwhile, Vanraj watches over Ritika and looks at his watch thinking of another episode from the past when Vanraj was late because of his family's responsibilities and Ritika tells him that after marriage they will live separately.

At home, Anupama is practising English speaking with Dolly.

Dolly turns the question upside down which confuses Anupama.

Later, Dolly explains to Anupama that she should be able to understand what others are saying then only she can give the right answers.

Dolly encourages her to remember what she already knows and also scares her with stories of being left alone.

Hearing about the horrid scenario, Anupama gears up and tells Dolly to teach her and she will learn from her.

Afterwards, Anupama speaks in English and Dolly praises her and tells her that she does not need to worry as people everywhere are people and will help her if they see her lacking in English.

Anupama is cheered by Dolly's words and goes to finish washing clothes.

Anupama Worries About Leaving the House

Anupama’s childlike excitement makes Dolly smile while Anupama comments on Hasmukh Kurta being tight and decides to watch Hasmukh’s diet to bring him in shape.

Later, Anupama calls Paritosh's old shirt as Samar’s new shirt and tells Dolly that it is only a matter of perspective.

While talking to Dolly Anupama shares her concern for Samar and Paritosh’s learning habits in her absence.

She also tells Dolly that although it is not yet confirmed that she will be going but still the thought of leaving them is making her cry.

Dolly tells Anupama that it is only a matter of seven days and some sacrifices have to be made to achieve something.

However, Anupama is panicking at the thought of leaving children and household responsibilities behind.

Dolly assures Anupama that she, Hasmukh and Moti Baa will look after her four children in her absence.

Anupama looks confused at the mention of four children whereas Dolly includes Vanraj and Leela also in her list of children making Anupama laugh and hug Dolly.

In the meantime, Vanraj finally decides to meet Ritika and comes inside.

Ritika looks at him smilingly and hugs her.

Vanraj remembers something else in the past where he begged Ritika to not go to the USA and told her that he will fulfil all her dreams.

However, Ritika plays cool and tells him that she will be marrying his father who lives in America and suggests he marry someone too.

Vanraj also remembers the tears that he has shed for Ritika after her betrayal and how dead he felt on the inside.

Meanwhile, Anupama is wondering about the results in the evening. Suddenly she sees Vanraj’s perfume on the dressing table and applies a little on herself to feel him close.

While keeping it back, the bottle is about to slip from her hand but she catches it in time thanking God for saving her from Vanraj’s anger.

On the other hand, Ritika compliments Vanraj’s perfume calling it her favourite.

Vanraj pretends to be surprised and gives credit to Anupama for liking it too.

Showing his family photograph to Ritika, he boasts about Anupama and calls her Lakshmi of the family.

Ritika regretfully tells him that she was wrong to leave him behind and she realised too late what she has lost.

Vanraj tells her that he is happily married and she should not talk like this.

Ritika calls on his bluff and tells him that she knows that he is only pretending to be happy but in reality, he does not like Anupama.

She also tells him that she has been keeping tabs on him through common friends and knows that he does not take her out or to any gatherings.

Ritika insists that she loves him and in truth, he loves her too therefore instead of dramatising everything, they should speak clearly, like the perfume he is wearing is because she like it and not his wife.

She also tells him that she is divorcing her husband and that Vanraj should do the same to Anupama.

Before Vanraj could answer he gets a call from his boss asking him to bring the audition tape.

Later, he tells Ritika that she cannot decide for him as he is a changed man now and he has moved on.

He does not want to rekindle the old flame and complicate his simple life.

He tells her that now he needs to leave as his family is waiting for him and he has to go.

Ritika admits loving him and begs him to not leave her.

Vanraj tells Ritika not to create a drama in a public place.

© Copyright tellybest.com, 2020, 2021. All Rights Reserved. Unauthorized use and/or duplication of any material from tellybest.com without written permission is strictly prohibited.
Cached Saved on: Sunday 2nd of October 2022 06:21:57 AM