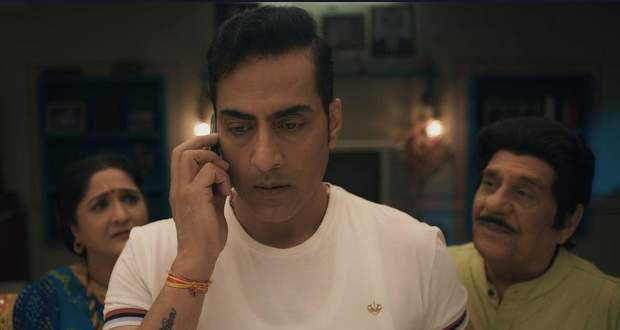 Today's Anupama Namaste America 30th April 2022 episode starts with Vanraj receiving a call from his boss. He congratulates Vanraj, saying that Anupama is going to America.

Vanraj looks perplexed by the situation and thinks that there is no outcome to telling a lie.

In the meantime, everyone is getting restless to know the results. So, in a deep voice, he announces the result saying, Anupama is going to America.

This news makes everyone numb and they standstill to process the awaited result. It brings mixed reactions.

While all the family members were celebrating the situation, Leela and Vanraj look down on it.

Ritika plans to play her game to convince Vanraj during Anupama's stay in the USA.

Everyone dances and celebrates the moment and Ritika even joins them.

She hugs Anupama and cunningly says that it is her destiny, indirectly referring, it to Vanraj.

Meanwhile, Anupama is extremely happy about her trip to the USA.

She wears Vanraj's shirt and impersonates him saying, Anu now you are going to the USA, so you must cook dozens of thepale (pancakes) before you leave and don't forget to call the children and their father.

She starts to pack and the very first thing that she keeps is the family photo.

He stops at a location and tells her that, it is over between them.

Ritika grabs him and reverts saying, he still has feelings for her.

She continues saying that, she knows that from the time, she has messaged him, he is unable to think of anything else, other than her.

Vanraj refuses her saying that she can't take all the decisions and leaves to drop her at the hotel.

CONVERSATION BETWEEN ANUPAMA AND MOTI BAA

Moti Baa enters the room. Anupama is embarrassed and awkwardly explains, that she was checking the size of Vanraj's shirt.

Moti Baa tells her that, she is her friend and she need not be shy.

Anupama hugs her and cries out saying that she has no idea how will she live for a week without them.

Moti Baa mockingly tells her to cry at the airport, not here.

Moti Baa with a serious tone, tells her that she needs to talk to her about something, and Anupama immediately says, is it about Ritika and continues saying that it is easy to know what's on your friend's mind.

Moti Baa asks her to trust Ritika but not blindly.

To this Anupama replies that they have been friends since their college days and explains that it is fine for them to meet.

Moti Baa is convinced by her arguments and playfully asks her, if she ever had a male friend.

She answers it by saying that, if she ever had a male friend, her mother would never have introduced her to slippers again.

She suddenly remembers that her only friend Devika, always used to mention a boy named Anuj, but she never had a chance to meet him.

Moti Baa ends the conversation, saying that Anupama is like a gold medal and that one who has gold would never run after bronze.

PACKING FOR THE JOURNEY TO THE USA

Everyone helps Anupama in packing.

Leela gets angry when Moti Baa gives Anupama one of her expensive sarees.

Moti explains to Leela that, when a person visits a foreign country, people frame their opinions about the country on the basis of one's clothes and behaviour.

They discuss the facilitation of an international call, and Dolly asks Anupama to carry a camera with her.

Vanraj is back home while Leela rushes out to secretly, talk with him.

She asks him, to not let Anupama go to the USA.

Leela continues saying that, he should hold her with his love and not by force.

She guides him saying that everyone has their place like anklets look best on the feet and women look best inside the house.

She ends the conversation by saying that, he should not let Anupama be successful.