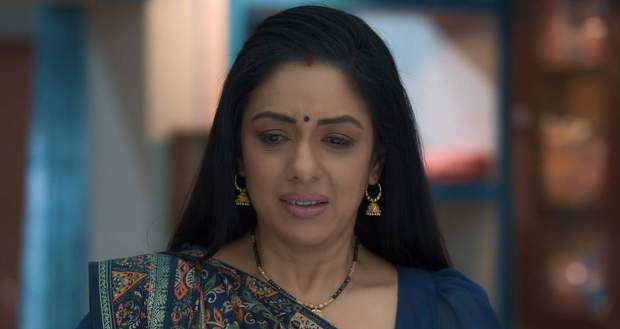 Today's Anupama Namaste America 3rd May 2022 episode starts with Anupama getting late for her interview.

On the other hand, Vanraj returns home to talk about Dolly’s marriage.

He expects Anupama to be at home. He makes a face when Moti Baa tells him that Anupama has already left for her VISA interview.

Anupama looks at Baapu Ji and tells him she cannot wait to fulfill her dreams.

With a nod from Hasmukh’s side, Anupama runs barefoot to the office.

The autorickshaw is stuck in traffic.

Running hurriedly, Anupama bumps into a man on his cycle but soon she sees her hope.

A lady colored in blue paint, invoking the shade of Anupama’s beloved Lord Krishna offers her a scooter ride.

Anupama returns with tears streaking down her face

She tells Moti Baa that she did horrible in her VISA interview.

She apologizes to Vanraj for disappointing him when he has always supported her.

On the contrary, Vanraj smiles and looks toward Leela.

Vanraj calls his boss and lets him know about the failure of Anupama’s interview.

However, the boss tells Vanraj candidly that it looks like he does not want to let Anupama go to the US.

Two weeks pass and Anupama tries to move on with her life.

Anupama tells Vanraj to get groceries and she gets engaged herself in the wedding preparations of Dolly.

She suddenly breaks down seeing her books.

Ritika is all ready to pounce over Vanraj while he tells her to step over.

However, Ritika proposes to Vanraj and tells him that she wants to flee away with him to the US.

Vanraj tells Ritika that he felt hurt when Ritika left him.

He won’t wait for her like a timid dog. Rather, he is the lion of the jungle.

Vanraj receives the call from his boss

The boss informs Vanraj that Anupama’s VISA is successful and she will be able to go to the United States.

Vanraj’s face falls and it seems like his statement did a reverse effect.

On the other hand, the VISA courier also gets delivered to Vanraj’s house and Leela receives it.

Anupama faints while working. Moti Baa takes her to the doctor who informs Anupama that she is pregnant.

Anupama does her happy dance and thanks, Lord Krishna.

Anupama also hesitantly asks the doctor whether she can travel to the US while being pregnant.

The doctor assures Anupama she can and Anupama is all smiles.

© Copyright tellybest.com, 2022, 2023. All Rights Reserved. Unauthorized use and/or duplication of any material from tellybest.com without written permission is strictly prohibited.
Cached Saved on: Wednesday 25th of January 2023 01:25:42 PMCached Disp on: Monday 6th of February 2023 07:12:22 PM