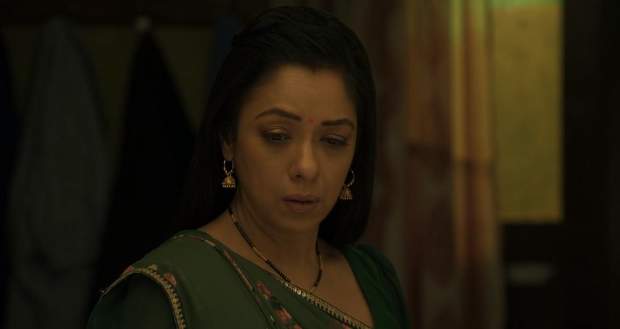 Today's Anupama Namaste America 5th May 2022 episode starts with Anupama finding out the lost passport in Vanraj's bag while Vanraj tries to cover up.

Later, Vanraj talks about how great a woman's sacrifice can be and tries to pacify Anupama.

In order to hide his shortcomings, Vanraj fakes placing Anupama on a pedestal to announce her greatness and sacrifice for her unborn baby.

Anupama and her lost ambitions

Trying to process her emotions, Anupama sits on the floor while she holds her passport in one hand and a small sock in another.

Anupama thinks of her dreams fading away in thin air and looks towards the wall while silently mourning the death of her ambitions.

The next morning, Leela is hesitant to face Anupama while she helps her in the kitchen.

Later, the family gathers for the morning tea where Vanraj and Leela try to conceal their faults and pacify Anupama by calling her a selfless goddess.

Raged with anger and guilt, Anupama stands up and stops Vanraj and Leela to call her a Devi.

Anupama talks to Moti Baa about how making a woman a Devi is the world's biggest fraud.

Crying after finding out the truth, Anupama accuses Vanraj and Leela in front of Moti Baa.

Later, Anupama asks Vanraj the reason behind lying and hiding her passport while Leela tries to speak for Vanraj.

Anupama confronts Leela that she was the one who was present in the house and she received the passport instead of Anupama.

Later, Leela is also accused of lying to Anupama's mother for allowing her to study but failed to fulfill her promise.

Meanwhile, Leela comes clean and accepts her fault confirming her plan of hiding the passport as she didn't want her daughter-in-law to go anywhere.

In order to teach Leela a lesson, Motiba says then Leela should be answerable to her as Motiba is her mother-in-law.

Leela says that she had to save her house from Anupama's dream and orders her to forget looking up and dreaming about her future.

As Leela continuously emphasizes to Anupama to quit her dreams, Anupama is shocked to see the real face of Leela.

Vanraj stands in front of Motiba and speaks in favor of Leela.

Anupama mourns the death of her dreams

Later, Anupama throws her ghungroo on the floor and they break into pieces like her heart.

Anupama mourns the last moments of her dreams and accuses Leela and Vanraj of how they plotted to gnaw her wings of dreams.

Pleading to give mere five days out of her own life, Anupama loses her breath while she cries and talks about sitting in an aeroplane and going to the US just for a few days.

Later, Anupama talks to Vanraj to look for some guilt in his eyes but fails to notice and walks away in disappointment.

Unbothered and ungrateful for having a daughter-in-law like Anupama, Leela and Vanraj ignore the drama.

Later, Vanraj tries to reach out to Anupama and explains to her about the care behind hiding her passport, and kisses her on the cheek.

Anupama reminisces about the romantic night they spent together and questions Vanraj if it was also included in his plan.

© Copyright tellybest.com, 2022, 2023. All Rights Reserved. Unauthorized use and/or duplication of any material from tellybest.com without written permission is strictly prohibited.
Cached Saved on: Wednesday 25th of January 2023 04:31:29 PMCached Disp on: Monday 6th of February 2023 06:04:02 PM