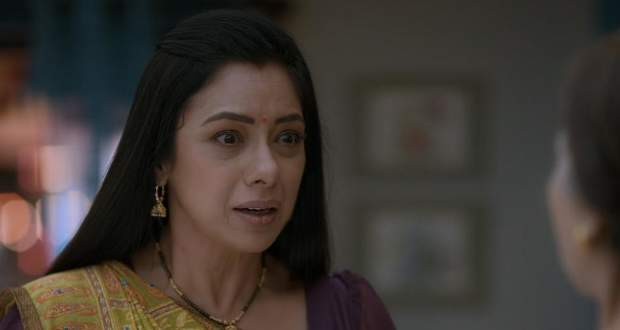 Today's Anupama Namaste America 6th May 2022 episode starts with Anupama confronting Vanraj for impregnating her on purpose so she cannot travel to America.

Anupama tells Vanraj frankly that being pregnant is not the end of a woman's dream.

Rather, it is a privilege of birthing a new kid and she can still chase her dreams.

Vanraj's head stoops low as he leaves the room quietly with Anupama crying herself to sleep.

Vanraj compliments Anupama fondly as she enters the room full of singing ladies.

A beaming Leela reminds Anupama that it has been a good decision not to go to America.

Moti Baa eavesdrops on Leela and Anupama's conversation and scolds Leela for being so mean to Anupama.

Leela is not able to understand Moti Baa's viewpoint and feels a married woman's duty is to solely look after her kids and husband.

Moti Baa is able to see through Anupama's sadness despite the bogus smile she wears all day long.

During the night, Moti Baa reminds Leela to hire a maid after Anupama's delivery.

However, she keeps quiet when Moti Baa reminds Leela of her condition of not being able to get a glass of water when Leela was pregnant with Vanraj.

Moti Baa has plans to see Anupama fulfilling her dream of dancing and blesses her immensely.

Just then, Vanraj receives a call from his boss who tells him that Vanraj will be going to America in two months.

Just as Anupama gathers herself and sits on the bed with difficulty due to the baby bump, Vanraj asks her where her tie is.

Anupama points toward the cupboard. However, Anupama's difficulty in moving here and there goes unnoticed by Vanraj in his excitement.

When Anupama asks where Vanraj is heading to in the night, he tells her that his dream has come true; he will go to America in two months.

Anupama's brows knit in confusion as she tells Vanraj that the baby will arrive in two months too.

Vanraj seems unbothered and advises Anupama to imagine his presence while he goes to America.

Anupama's heart shatters as Vanraj does not value her emotions or her needs.

When she mentions that she has given her all to this marriage and house, Vanraj makes her feel guilty for wanting to fulfill her dreams.

He ends up calling Anupama uncompromising, making her realize how easy it is for a man to label a woman selfish.

On the other hand, Anuj arrives in Ahemdabad to meet Anupama.

Since Anupama did not travel to America, he has come to meet her personally.

As Vanraj leaves for the office, Anuj arrives in front of Vanraj's house.

VANRAJ CARPOOLS WITH A GIRL WHOSE NAME IS KAVYA

As Vanraj gets late for work, he asks the girl sitting in a taxi where she is heading to.

When she tells him her destination, he requests her to let him carpool because he has to go to the same place.

The girl nods and Vanraj gets into the passenger seat.

ANUPAMA NURTURES HER DREAM INSIDE HER HEART

Anupama realizes that there is no point in holding a grudge against Vanraj or Leela.

However, she decides not to wait for her chance with a mopey face but will wait for it merrily.

The episode ends with a poem about pain.

A montage is shown of Anupama getting engaged in the household chores again and playing with Toshu and Samar.

A familiar wind blows as Anuj hesitates to knock on Anupama's door.

He turns his back as Anupama gazes at the man standing outside.

She comes out to greet him but Anuj leaves, without showing his face to Anupama.

The narrator speaks of pain as a binding force of bringing people together and separating them.

However, people keep wandering endlessly in their life even when life reminds them of their destiny through pain.