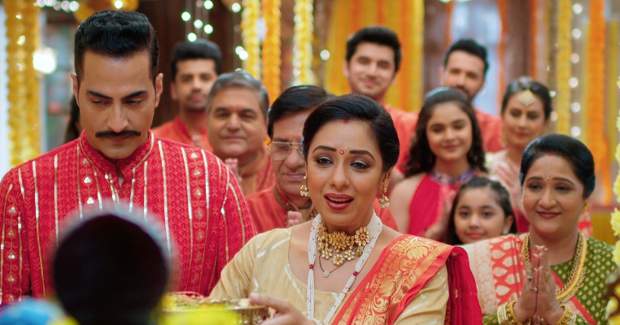 Today's Anupama 10 Oct episode starts with Anupama bringing oil for Baa. Baa appreciates Anupama in her own style while Anupama wants to know if she has made a small place in her heart or not.

Baa says she doesn’t dislike her and Anupama gets delighted. Meanwhile, Kavya wishes to impress Baa as she is her would-be mother-in-law. She further wishes to be in Vanraj’s house but is content that Vanraj will marry her before Anupama.

Kavya gets upset when she receives an invite from Pakhi for Anupama’s Mehendi. Kavya is eager to come to the Mehendi function as she is also going to be a bride.

Anupama thanks Baa for teaching her so many things and giving the best gift of her life. Later, in the morning Anupama does the Aarti while Baa gives blessings to Anupama and Vanraj.

The rituals of the Mehendi start and Kavya arrive there. Samar gets excited to learn that Nandini is coming while later the function starts. Baa performs rituals of Anupama’s Mehendi while Kavya also secretly follows the same steps.

Further, Baa grinds the Mehendi leaves to form a paste. Anupama gets the Mehendi from Meenu’s hand as a ritual while Kavya also forcefully performs the same ritual.

Nandini witnesses the scene and gets angry but is again unable to tell Samar the truth. The family starts dancing and Anupama and Vanraj also perform a dance. Kavya imagines dancing with Vanraj.

Samar starts crying and thanks Vanraj for bringing happiness in his mother’s life. Nandini decides not to tell anything to Samar as he is also very happy. Later, Anupama and Kavya both get Vanraj's name on their hand.

Rakhi witnesses the scene and exposes Kavya’s hand in front of everyone.

© Copyright tellybest.com, 2018, 2019, 2020. All Rights Reserved. Unauthorized use and/or duplication of this material without written permission from tellybest.com is strictly prohibited.
Cached Saved on: Wednesday 28th of October 2020 04:15:07 PM