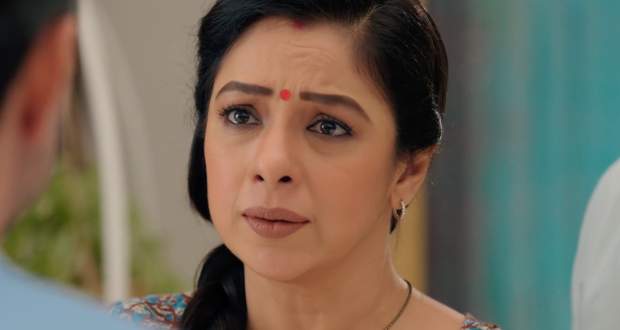 Today's Anupama 10 Sep episode starts with Anupama asking Anirudh to leave her house. She is upset with Anirudh’s allegations while Anirudh is adamant to speak the truth.

Vanraj accuses Anirudh of spoiling Kavya’s name and taking revenge from her. Anirudh and Vanraj start fighting and accuse Vanraj of visiting his house often.

Anupama rebukes Anirudh for accusing Kavya and takes her side. Anupama has full faith in Kavya and Vanraj and further asks Anirudh to leave. Anirudh says he was like Anupama but changed after his trust was broken by Kavya.

Nandini and Samar race on bike and bicycle while Samar loses. Nandini is about to fall when Samar holds her. Anirudh comes there and accuses Nandini to be just like her aunt.

Nandini speaks to him rudely and asks him to leave. Meanwhile, Kavya apologizes to Anupama while Baa accuses her of creating problems in their house. Anupama says it is not Kavya’s fault and has full faith in Vanraj.

Anupama assures Kavya that they are always there for her. Elsewhere, Nandini vents out her frustration about marriage in front of Samar. Later, Baa accuses Anupama of being too nice to Kavya.

Anupama wishes to help Kavya as a woman while Baa asks if Anupama has a doubt about the affair. Later, Vanraj asks Kavya to warn Anirudh to never return to his house.

Kavya gets upset with Vanraj as he didn’t ask her whereabouts and didn’t offer to drop her. Elsewhere, Anupama has blind trust in Vanraj and tells Baa that she can’t trust a stranger.

Vanraj tells Kavya that he has to do a drama of being a good husband in front of Anupama and the family. Kavya asks him not to break his trust as everything will get destroyed.

© Copyright tellybest.com, 2020, 2021. All Rights Reserved. Unauthorized use and/or duplication of any material from tellybest.com without written permission is strictly prohibited.
Cached Saved on: Saturday 23rd of January 2021 06:54:09 AM