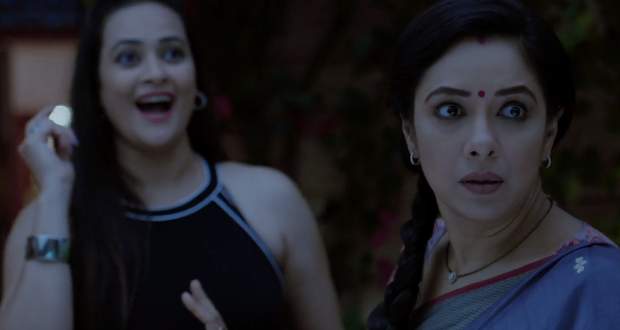 Today's Anupama 11 Aug episode starts with Devika revealing some more school time stories. She reveals Anupama slapped a boy who was after Devika.

The family is shocked while Devika is surprised to see Anupama’s condition in the family. Later, Vanraj talks to Kavya over the video call, and Kavya asks him to sing a song.

Vanraj sings a song while Kavya goes to sleep. Anirudh comes at the same time and asks Vanraj to sing a song for him as well. Meanwhile, Devika wants Anupama to show her dance moves in front of her kids.

Devika threatens to tell Anupama’s secret if she doesn’t perform a dance. Anupama performs a special dance on Sridevi’s song and everyone else joins her.

Devika tells Anupama’s kids about a boy named, Anuj who was madly in love with Anupama. Vanraj overhears this while Devika reveals Anupama was the most Sanskari girl in their college.

Anupama performs Pooja in the kitchen and then goes to give water to Vanraj. Vanraj asks her about the boy who used to like her. She reveals she never even talked to him.

She further gives an explanation of how she has always had her eyes for Vanraj. Anupama further tries to explain she loves Vanraj in a cute way.

Upcoming Anupama episode update: Devika thinks Vanraj and Kavya are having an affair.