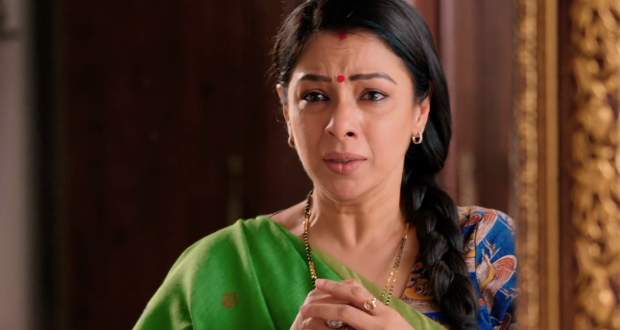 Today's Anupama 12 Oct episode starts with Anupama getting shocked to see Vanraj’s name on Kavya’s hand. Kavya makes up a story and says she was distracted when the girl was putting Mehendi.

Rakhi mocks her for not erasing it while she says she was about to do that. Further, Samar uses a handkerchief to erase Vanraj’s name while Anupama also says Vanraj’s name can only be on her hand.

Baa says Samar has not done anything wrong and the function continues. Rakhi again mocks Kavya while Nandini warns her of not doing anything wrong.

Vanraj gets a headache and Anupama wishes to make tea for him. She is about to go to the kitchen when Kavya holds her hand and does the drama of falling on the ground.

Anupama’s Mehendi gets spoiled and she starts crying. Kavya apologizes while Baa rebukes her for spoiling their function. Anupama thinks it is a bad omen while Vanraj consoles her by saying it is not their first marriage.

Kavya also states that she should feel bad as her Mehendi was also spoiled. Later, Vanraj consoles Anupama while she shows his name on her arm. Further, Vanraj accidentally breaks Anupama’s Mangalsutra and she gets upset.

Meanwhile, Vanraj continues to get distracted and leaves to meet Kavya. Anupama wears the other Mangalsutra and consoles herself. Later, Samar takes the car to buy some things while Vanraj gets worried as there is a Mangalsutra in the back seat.