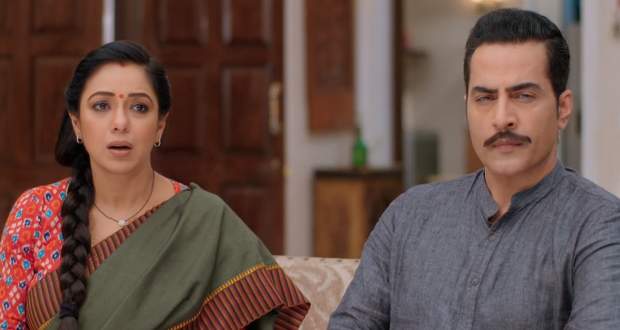 Today's Anupama 12 Sep episode starts with Vanraj receiving a call from Kavya. He ignores the call while Rakhi eyes his every move. Meanwhile, Kinjal and Paritosh get excited about their engagement.

Rakhi suggests performing the engagement in two-three days while Anupama and others think it is too early. Pramod tries to talk but Rakhi doesn’t let him.

Rakhi also reveals that the engagement might be delayed by 2-3 months as they will get busy with the new session. Vanraj and Anupama are ready for the engagement in the next 2-3 days.

Anupama suggests organizing the engagement in a community hall while Rakhi wants to do it in a club. She reveals that the cost will be around 15 Lakhs for the whole engagement.

Everyone gets shocked to learn the cost while Rakhi says she has already done the booking. Baa gets upset with her while Vanraj says no to use of the club for engagement.

He suggests the engagement should happen on a smaller scale and asks Kinjal about her wish. Kinjal is happy either way while Pramod assures to cancel the booking of the club.

Anupama gets happy while Rakhi fumes in anger with her flop plan. She decides to break their house along with the wedding. Later, Rakhi asks Anupama to do one thing for Kinjal’s happiness and buy a ring worth 5 Lakhs for the engagement.

Samar rushes to tell Nandini about the engagement of Kinjal and Paritosh. Elsewhere, Anupama is worried about Rakhi’s demand and fears about the future.

Upcoming Anupama episode update: Baa and Vanraj refuse to spend so much money on the engagement.