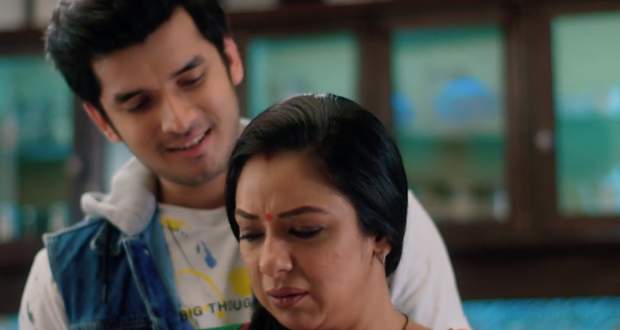 Today's Anupama 14 Jul episode starts with Samar trying to make Vanraj understand Anupama’s importance. Meanwhile, Anupama imagines herself taking care of the house and realizes it is not her house.

Bapuji tries to make Vanraj understand and says Leela also breaks the rules. He decides to throw Leela out of his house while Leela says how someone can throw their wife out of the house.

Samar opens the door for Anupama and gets her inside the house. Anupama feels bad and thinks her pride in being a good mother and wife has broken.

Samar stands by Anupama while Leela wants her to serve dinner. Later, Bapuji wants Leela to at least become a mother-in-law if not a mother.

He reminds her that their daughter Dolly also works and goes for parties. Meanwhile, Vanraj is talking to someone over the phone and smiling.

Anupama serves the food and waits for Vanraj to come for dinner. Anupama brings food for Vanraj in his room and apologizes again. Vanraj wants her to understand the responsibility of a family and never do this mistake again.

He doesn’t eat anything and asks her to take the food back. Samar wants Anupama to eat while she doesn’t feel like eating. Samar asks about her outing and she reveals she danced.

Samar asks her to dance with him and they both dance in the kitchen. The next morning, Anupama gets ready for a special occasion and tries to remind Vanraj of the date.

Vanraj reveals later that there is a party in the evening for a special occasion while Anupama thinks it is for her birthday.

Upcoming Anupama episode update: The party thrown by Vanraj turns out to be for Kavya’s promotion.

© Copyright tellybest.com, 2020, 2021. All Rights Reserved. Unauthorized use and/or duplication of any material from tellybest.com without written permission is strictly prohibited.
Cached Saved on: Saturday 23rd of January 2021 02:14:26 PM