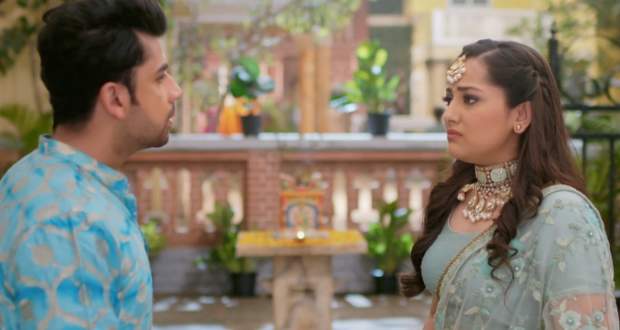 Today's Anupama 14 Oct episode starts with Kavya getting scared to see Devika and hiding inside the room. The family members gather to dance together while Kavya continues to stay near Vanraj.

Paritosh asks her to side as he needs to take Vanraj and Anupama’s video. Nandini decides to tell Paritosh the truth as he is more mature. She takes him outside and reveals the extra-marital affair of Vanraj and Kavya.

Paritosh is not ready to believe it and thinks she is doing a prank on him. Paritosh asks her to not say this in front of anyone else while Nandini reveals that Vanraj is going to get married to Kavya as well on the same day.

Nandini wants him to tell Anupama the truth while Kinjal starts searching for Paritosh. Samar witnesses Nandini and Paritosh talking. Meanwhile, Nandini asks him to come along to the temple to get the proof.

Anupama’s Mangalsutra gets stuck in Vanraj’s button while Dolly points what she will wear during the wedding. Samar says that Vanraj has already bought a new Mangalsutra for Anupama and shows it.

However, Vanraj had bought that Mangalsutra for Kavya. Later, Kavya learns that Nandini and Paritosh have gone to a temple and gets worried. Meanwhile, Paritosh gets shocked to see Vanraj and Kavya’s name on the marriage register.

Paritosh gets really upset and blames Kavya is forcing Vanraj to marry her. Paritosh confronts Sanjay and learns that he already knows about Kavya and Vanraj’s affair. Sanjay asks him to stay quiet as Anupama’s happiness will be ruined.

Paritosh confronts Kavya and blames her for spoiling their family. Kavya says that Vanraj also loves her and is not scared of the police.