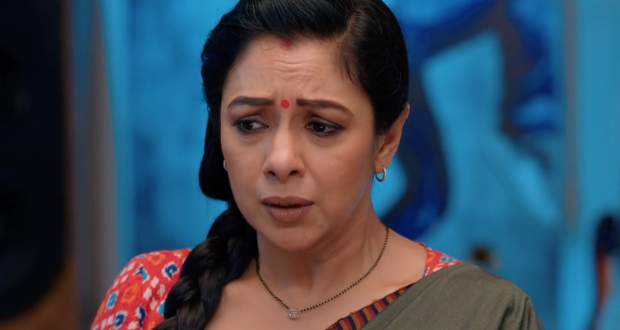 Today's Anupama 14 Sep episode starts with Vanraj and Paritosh hugging each other and celebrating the happy moment. Later, the family starts discussing the engagement while Vanraj asks Anupama to stay for the discussion.

Baa shows the ring design she likes of gold while Anupama is hesitant in talking about Rakhi’s demand. Anupama says Kinjal likes a ring and Rakhi has told her the cost i.e. 5 Lakhs.

Everyone gets shocked to learn the price. Meanwhile, Promod is suspicious of Rakhi’s actions while Rakhi acts innocent. Later, Baa creates a scene over Rakhi asking for an expensive ring.

She doesn’t want to spend too much while Vanraj also agrees with his mother. He doesn’t want to cave into Rakhi’s ego and refuses to buy the ring. Baa asks Anupama to inform Rakhi while Paritosh overhears their conversation.

Paritosh wants to make Kinjal happy and feels helpless as he can’t buy a ring for her. Anupama gets worried about her son and gets in a dilemma. The next morning, Dolly reveals she has brought new jewelry by selling her old one.

Anupama gets an idea and leaves from there. However, Baa suggests Dolly should have asked her mother-in-law. She also says that she might kill Anupama if she takes such a step.

Anupama wishes to go and invite her mother and brother while Baa asks her to not go empty-handed. Vanraj also wishes to go while Kavya overhears their conversation.

She asks Vanraj to come along as there is an important meeting. Vanraj refuses to go as he has to go with Anupama. Vanraj continues to act as a loving husband.