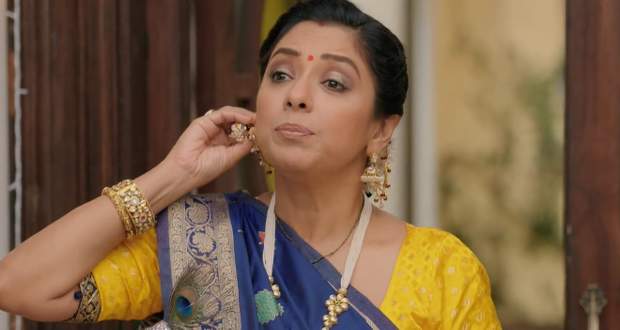 Today's Anupama 15 Aug episode starts with Anupama singing a Bhajan to start the auspicious day of Janmashtami. Later, the family enjoys the festivities in the house.

Vanraj asks Anupama if she has called Kavya to invite her. Anupama assures him she will call her and convince her to come. She gets successful in convincing Kavya and Vanraj gets delighted.

Kavya feels Vanraj is behaving weird while Vanraj doesn’t want to fight. Meanwhile, Samar is forced to dress like Krishna as he is the youngest.

Everyone makes fun of him but later he asks them to treat him well. Toshi presses Samar’s feet while Pakhi feeds him fruits. At the same time, Kinjal arrives dressed in simple clothes.

Baa taunts her for dressing simple and starts blaming her parents for not teaching her anything. Anupama saves Kinjal from the taunts and says she had told her to dress simple as she will help her in dressing up in Gujarati style.

Anupama apologizes to god for lying to Baa while Kinjal makes fun of Samar. Meanwhile, Kavya feels weird with Vanraj’s strange behavior while Vanraj asks her to wear pink.

Kinjal thanks Anupama for helping her in front of Baa. Anupama shares her experience as a new daughter-in-law and wishes to be friends with Kinjal. She helps Kinjal get ready as well.