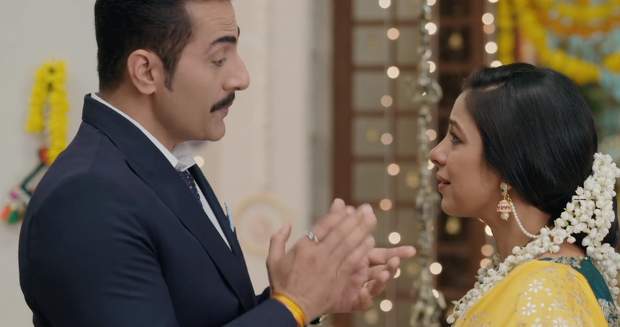 Today's Anupama 16 Jul episode starts with Vanraj and Kavya cutting the cake. Anupama feels bad and at the same time, Samar comes and starts dancing unaware of the situation.

Anupama signals him to stay quiet and imagines celebrating her birthday with Vanraj. Her dream shatters and in reality, Samar wishes her birthday.

Samar is confused with everyone’s expressions and sees the cake. Anupama gets upset and goes into the kitchen. Kavya brings cake for her and apologizes to her.

Anupama refuses to eat the cake as it is not her birthday cake. Vanraj gets upset and wants Anupama to eat the cake. Kavya decides to leave and Vanraj follows her.

Vanraj leaves to drop Kavya and this upsets Anupama even more. Vanraj tries to console Kavya while Kavya wants him to take his wife’s side as she is just a colleague.

Samar is upset with Vanraj’s behavior while Anupama tries to defend him. Meanwhile, the family members discuss forgetting Anupama’s birthday.

Samar has brought a gift for Anupama and makes her happy. Samar makes a cake out of Halwa and decorates it with letter A. Samar brings the cake outside and everyone wishes Anupama.

Vanraj comes and mocks Anupama for not being mature enough. He insults her and blames her for downgrading his reputation in front of his colleague.

Anupama tries to apologize to her while Vanraj ignores her. Later, Samar gets upset with his siblings for not taking their mother’s side. The next morning, Vanraj asks Anupama to apologize to Kavya over the phone.

© Copyright tellybest.com, 2018 & 2019. All Rights Reserved. Unauthorized use and/or duplication of this material without written permission from tellybest.com is strictly prohibited.
Cached Saved on: Wednesday 5th of August 2020 04:11:41 PMCached Disp on: Thursday 6th of August 2020 11:48:08 PM