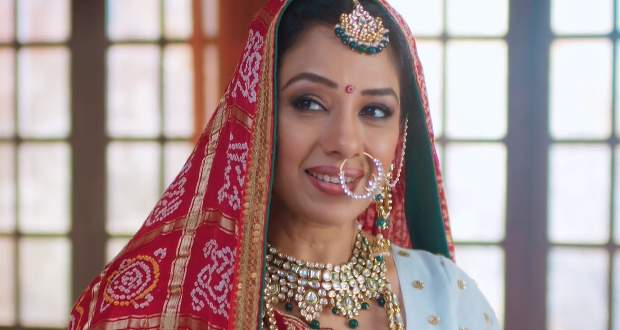 Today's Anupama 16 Oct episode starts with Devika, Dolly, and Pakhi enjoying a sleepover. Anupama comes there and wishes to use face pack and eyebrow threading before marriage.

The girls make fun of her and later they all start dancing. Later, Anupama enters the room after applying a face pack and scares Vanraj. In the morning, Anupama thanks Krishna Ji for giving her so much happiness.

Kavya leaves her house while Sanjay catches Vanraj going outside. He warns her of not choosing the wrong path and further confronts him about lying to Paritosh.

He closes the door and makes a Laxman Rekha for Vanraj. Vanraj opens the door and is adamant to go out of the house. Sanjay doesn’t give up and calls Baa and Bapuji outside.

He reveals that Vanraj is going to office while Baa and Bapuji get successful in stopping him from going. Kavya reaches the temple and waits for Vanraj.

Sanjay finds Vanraj missing and starts searching for him. He finds him downstairs while the Pandit at the temple tells Kavya that he has to leave.

Upcoming Anupama episode update: Vanraj is unable to go to the temple while Kavya decides to visit Shah's house.