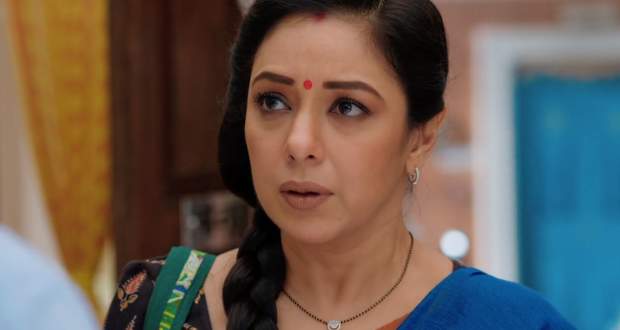 Today's Anupama 16 Sep episode starts with Pakhi asking Nandini to teach them to dance. Nandini suggests they should perform a couple dance and everyone agrees.

They all make pairs while Nandini pairs with Samar and starts dancing. Samar is mesmerized with Nandini’s beauty and feels love for her. Baa calls the jeweler and learns something shocking.

Anupama returns home while Rakhi also pays a visit. Rakhi reveals that Anupama has bought the ring from their family jeweler and acts surprised. She suggests that Anupama saw the happiness of just her would-be daughter-in-law.

Vanraj gets angry but asks Pakhi to show the community hall to Rakhi. Nandini also feels awkward and leaves. Vanraj asks Anupama how she bought the ring while Baa reveals Anupama has sold her jewelry.

Baa gets angry and rebukes Anupama for taking such a decision. Vanraj starts shouting at Anupama while Bapuji wants Anupama to speak for herself. Anupama reveals that she overheard Baa and Dolly’s conversation and got the idea.

Rakhi learns that her friend is coming to India with her son and decides to fix the alliance. Meanwhile, Paritosh apologizes to Anupama for the trouble she had to face because of the ring.

Leela takes out all the accounts to check if Anupama returns everything. Bapuji tries to convince her that she is doing wrong while Baa sticks to her decision.

Upcoming Anupama episode update: Kavya comes to Shah's house and declares she will stay there.

© Copyright tellybest.com, 2018, 2019, 2020. All Rights Reserved. Unauthorized use and/or duplication of this material without written permission from tellybest.com is strictly prohibited.
Cached Saved on: Saturday 26th of September 2020 11:44:51 AM