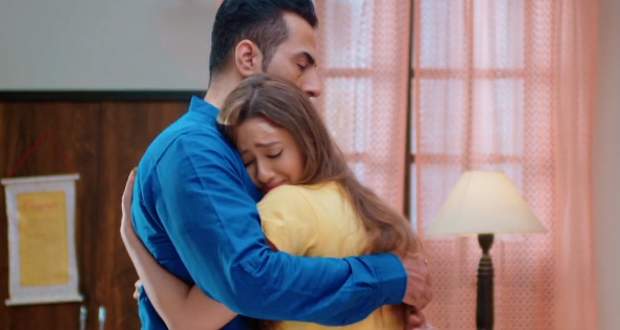 Today's Anupama 18 Sep episode starts with Vanraj asking Kavya to stay at their house. Anupama asks Kavya to go inside while Baa is clearly not happy with her stay.

Anupama wishes to take care of Kavya while Baa asks her to not be so good-natured. She wants her to think about herself and the family as they are going to have an engagement function soon.

Vanraj takes Anupama’s side while Baa gets upset and goes inside. Vanraj gets angry and calls Anirudh but his number is off. He fears Anirudh creating trouble at the engagement.

Anupama takes care of Kavya and asks her to stay at their house for as long as she wants. The next morning, Baa wants to throw Kavya out of the house while Anupama tries to console her.

Further, she opposes Vanraj and Kavya talking in a room privately. Vanraj goes in Kavya’s room and learns that Kavya got injured by accident. She says she was scared of Anirudh’s aggression so she left the house.

She hugs Vanraj while Vanraj wants her to file a complaint. Kavya doesn’t want to take action as Anirudh’s life will get spoiled. She also scares Vanraj that Anirudh might expose their relationship.

Anupama doesn’t see their closeness as Vanraj sees her first. Anupama wants Kavya to take a leave from the office and Vanraj also grants the leave. Later, Anupama serves breakfast to everyone and wishes to take Kavya’s help in Paritosh’s engagement preparation.

Samar gets mesmerized to see Nandini dancing and later wishes to talk to her. Meanwhile, Anupama and Kavya say goodbye to Vanraj together.

Upcoming Anupama episode update: Anirudh takes a picture of Kavya and Vanraj while they are hugging.