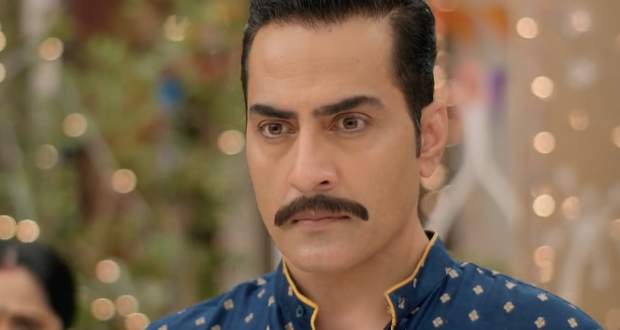 Today's Anupama 19 Aug episode starts with Rakhi mocking the Shah family for wanting a housewife daughter-in-law. She further insults Anupama for being illiterate.

Vanraj fumes in anger and rebukes Rakhi for insulting his wife and family. He states that Anupama might not be a graduate but knows how to treat people.

He points Rakhi has lost all kinds of respect in her daughter’s eyes as well as their family’s eyes. He further says that he and his wife also have the right to take the decision of Paritosh and Kinjal’s alliance.

Nandini points Vanraj’s love for Anupama while Kavya is shocked to see Vanraj taking a stand for Anupama. Vanraj asks her to leave while Anupama doesn’t want Kinjal to leave that way.

Rakhi points the fact that Vanraj was ashamed of introducing his wife and introduced Kavya instead of the day they came to talk about the alliance. She returns the necklaces worn by Kinjal and leaves.

Toshi tries to stop her while all the other guests also leave. Vanraj blames Anupama for whatever happened at their house. He blames her for getting Kinjal ready and creating a problem for the family.

Vanraj states that he is tired of Anupama’s mistakes and behavior. Meanwhile, Kinjal is upset with her mother’s behavior while Rakhi is adamant to open her daughter’s eyes.

Paritosh is upset with his father’s behavior while Vanraj asks him to never take Kinjal’s name again in the house. Paritosh also blames his mother for breaking his alliance.

© Copyright tellybest.com, 2018, 2019, 2020. All Rights Reserved. Unauthorized use and/or duplication of this material without written permission from tellybest.com is strictly prohibited.
Cached Saved on: Sunday 1st of November 2020 04:45:19 AM