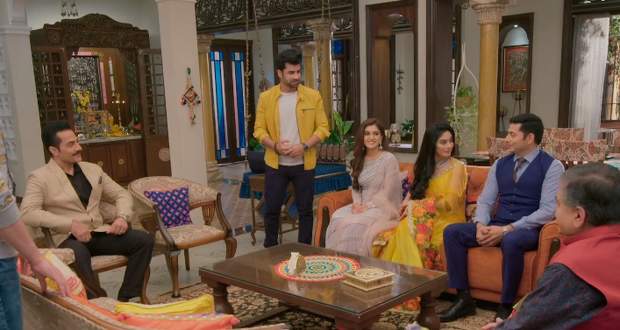 Today's Anupama 1 Aug episode starts with Anupama’s mother blaming herself for getting her married so early. Bhavesh thinks her husband and family have never supported her.

Vanraj says he has always supported Kavya and asks her to come home as Kinjal’s family is coming. Meanwhile, Toshi and Samar fight over Anupama while Vanraj asks them to behave.

Anupama continues to blame herself for not being able to handle her home and work properly. She calls Samar and learns Kinjal’s family is coming home.

Kavya comes at the same time and Kinjal’s mother thinks she is Toshi’s mother. She asks Kavya about her qualifications and gets impressed while Vanraj is unable to tell about her identity.

Anupama compliments Kinjal in her language and Kinjal’s mother questions her language. Kinjal’s father asks for a Latte while Kavya offers to make it.

Anupama says she knows how to make it and leaves for the kitchen. She gets shocked to see ordered food while Kavya apologizes for ordering.

Upcoming Anupama episode update: Kinjal’s mother makes a fuss about Anupama not being a graduate.

© Copyright tellybest.com, 2018 & 2019. All Rights Reserved. Unauthorized use and/or duplication of this material without written permission from tellybest.com is strictly prohibited.
Cached Saved on: Monday 10th of August 2020 11:00:36 AM