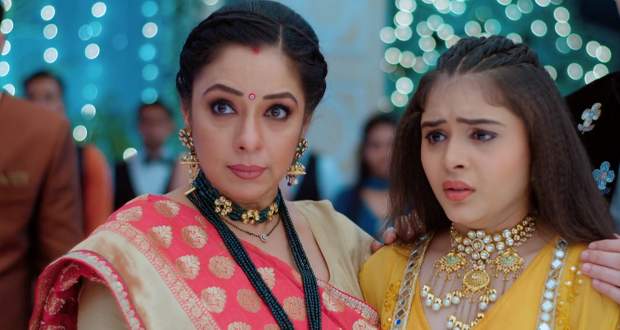 Today's Anupama 1 Oct episode starts with Rakhi taunting Kavya and Vanraj for being alone outside. Kavya says they were talking to the client while Rakhi gets suspicious.

Pakhi goes into the washroom while Jhilmil waits outside. Sid comes inside the washroom and threatens to leak all her photographs if she doesn’t send Jhilmil back to the party.

Pakhi is forced to send Jhilmil to get her makeup pouch. Anupama finds Jhilmil outside and gets suspicious. She rushes towards the washroom while Sid harasses Pakhi.

Anupama comes in the washroom and slaps him. Meanwhile, Samar and Nandini perform while Bapuji wonders where Anupama is. Later, Anupama again gives a tight slap to Sid when he argues with her.

Anupama comes outside with Sid and Pakhi and pushes Sid forward towards his parents. Rakhi gets upset with Anupama’s act and rebukes her while Anupama asks her to keep her voice low.

Rakhi breaks the marriage and asks Kinjal to come along while Vanraj asks Rakhi to shut her mouth. He wants Anupama to speak while Anupama explains the whole incident.

Vanraj gets furious and holds Sid by his collar. Rakhi and Vanraj again get into a fight while Baa asks both of them to stay quiet. Anupama speaks up for her daughter and says she will not apologize as she has not done anything wrong.

She further asks Rakhi to break the relationship if she is so eager. Rakhi apologizes to Mrs. Desai while Mrs. Desai slaps her son. Further, she apologizes to everyone for her son’s deeds and appreciates Anupama for being the best mother.

She further asks Rakhi to not end the relationship as it will be her biggest mistake.

© Copyright tellybest.com, 2018, 2019, 2020. All Rights Reserved. Unauthorized use and/or duplication of this material without written permission from tellybest.com is strictly prohibited.
Cached Saved on: Saturday 28th of November 2020 05:36:07 AM