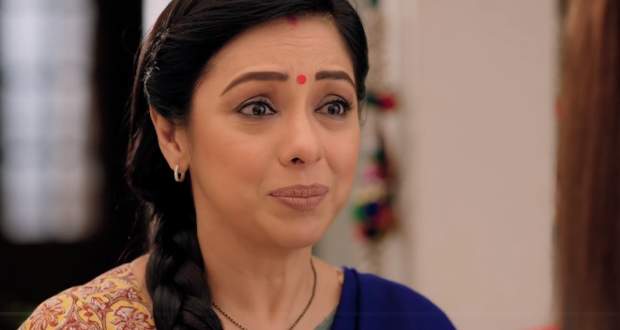 Today's Anupama 1 Sep episode starts with Anupama scolding Pakhi for her behavior. She apologizes to Kavya and states that she trusts her fully.

Kavya is shocked by Anupama’s statement and at the same time, Samar tells Anupama that Paritosh is with Kinjal. Meanwhile, Kinjal asks Paritosh to do something and is scared to go against her mother.

Kinjal threatens to break up if he doesn’t do anything. Later, Anupama shares with Kavya that she feels left behind her children is not able to understand what they really want.

Kavya says that her children are lucky that they got a mother like Anupama. Sanjay comes at the same time and Kavya leaves in a hurry. Sanjay consoles Anupama while she is scared of another storm approaching their home.

Kavya reaches the office and starts crying in front of Vanraj. She feels guilty for breaking Anupama’s trust and is not able to handle the weight of their relationship.

Sanjay asks Anupama if she feels jealous of Kavya. Anupama trusts and loves Vanraj and doesn’t feel jealous. Meanwhile, Kavya wants to end their relationship while Vanraj reminds her that they love each other.

Vanraj states that he doesn’t love Anupama and that Kavya is the only one important in his life. Kavya gets emotional listening to his words and hugs him.

Anupama upset about Paritosh and learns that he didn’t even go to the coaching classes. Kinjal also doesn’t know where he is while Anupama fears the worst. Vanraj also leaves for home while Samar and Sanjay are not able to find Toshi.

© Copyright tellybest.com, 2018, 2019, 2020. All Rights Reserved. Unauthorized use and/or duplication of this material without written permission from tellybest.com is strictly prohibited.
Cached Saved on: Monday 30th of November 2020 11:14:42 PM